CENTREVILLE, MD – Mary Love Gray Carter Lilley, a loving mother, grandmother, and great-grandmother, passed away in her home in Centreville, MD on March 22, 2021 at the age of 92. She was born February 14, 1929 in Norfolk, VA. 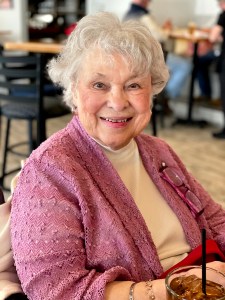 At 18 years of age, Mary Love married Richard Earl Carter and moved to Gates County, NC. They raised two children, Richard Edward and Margaret Dee. Four years after the death of Richard Earl in 1966, Mary Love was blessed with two bonus step-children, Doug Lilley and Jennifer Lilley Paris. After 65 years in Gates County, Mary Love spent five years at Lighthouse Pointe in Chesapeake. She spent the last four years of her life in Maryland with her daughter and son-in-law caring for her at their home.

Mary Love was an integral member of the Gates County community for 65 years. She worked at Miller Equipment Company, Tarheel Bank and Trust, and retired from the ASCS Office in Gatesville. After retirement, she worked at Lane Farm Supply and the Gates County Sheriff’s Office. She was a member of Gatesville Baptist Church, its Adult Choir, and the WMU. Nothing brought Mary Love more joy than her family, especially her grandchildren and great-grandchildren. Mary Love was a beloved member of the community and her many friends and cousins were a special part of her life.

In lieu of flowers, contributions may be made to Gatesville Baptist Church, P.O. Box 167, Gatesville, NC 27938.

Online condolences may be made at www.millerfhc.com.