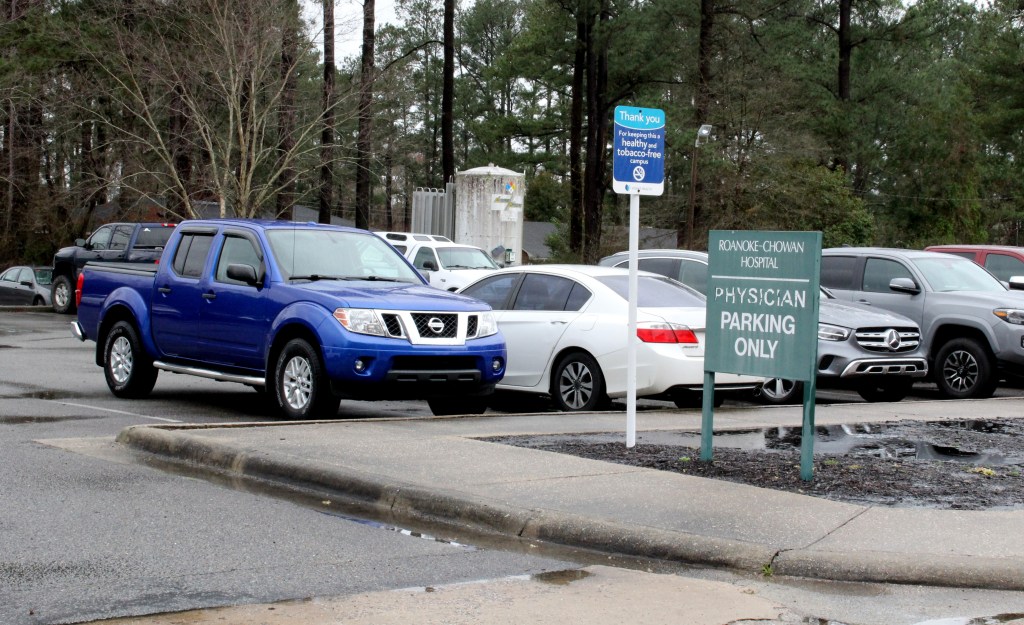 The favored location for a helicopter landing pad adjacent to Vidant Roanoke-Chowan Hospital will be in what is now the physicians’ parking lot on West Memorial Drive. Staff Photo by Cal Bryant

AHOSKIE – The months-long debate continues regarding the possible construction of a helipad adjacent to Vidant Roanoke-Chowan Hospital.

This issue was again on the agenda of the Ahoskie Town Council’s most recent meeting, this time in the form of a proposed ordinance under consideration. An advertised public hearing was held within a near-empty meeting room, still void of the general public due to COVID-19 restrictions. However, those interested in this particular topic had the ability to listen in and make comments electronically.

Ahoskie Zoning Administrator Tomekia Holloman said the proposed ordinance is to allow for a more convenient helicopter landing zone for medical use while promoting public health, safety and general welfare and to minimize public and private losses while protecting life.

Currently, when a medical helicopter is summoned to Ahoskie to provide transport, that aircraft lands on the front lawn of Hertford County High School, which is the designated landing area.

Ahoskie Town Manager Kerry McDuffie explained to the News-Herald that the way the protocol works, once the helicopter lands, its crew is transported to the local hospital by Hertford County EMS.

“Since the helicopter crew are paramedic level, they have to accept the transfer of the patient from the hospital; then all are taken back to the high school where the helicopter crew and patient take off for the flight to a regional hospital, which in the majority of all cases is Vidant Medical Center in Greenville,” McDuffie said. “All of this takes 45 minutes, at a minimum; longer if there are any complications.

“To be honest, a patient can be loaded onto an EastCare ground unit and arrive in Greenville before the helicopter can get there, due to all the travel associated between the high school landing zone, to the hospital, and back to the landing zone,” McDuffie added.

He said the process could be more efficient if the helicopter could land adjacent to the hospital.

“That would cut down on a lot of time,” McDuffie stated.

At previous council meetings, options were discussed about the exact location of a helipad at the hospital. The favored location is a parking lot, located off West Memorial Drive, that is now designated for use by physicians working at the hospital.

“There was some previous discussion about using a portion of the visitors parking lot at the front of the hospital as the landing pad, but if it’s placed there then a patient would have to be wheeled through the entire hospital from the emergency room in order to get to the helicopter,” McDuffie noted. “Having it near the back edge of the hospital, right next to the ED, is more practical.”

McDuffie added that town officials understand the concerns of the residents near that proposed area for the landing pad.

“The council has to weigh what’s best medially for those needing to be airlifted as opposed to the concerns of noise and potential loss of property value for those living near the proposed landing pad,” he said.

The ordinance was previously presented to the Council for possible adoption, but was sent back to the Planning Department due to concerns with the setbacks.

“We went back and took measurements and met with the architect,” said Holloman in her presentation to the Council at their scheduled meeting on March 9. “We’ve made some revisions with the setbacks at a minimum of 75 feet from the property line. A sound barrier wall is also recommended between neighboring properties to reduce the noise and wind from the helicopter.”

The Council is required to hold a public hearing prior to taking any action on the proposed ordinance. There was no public comment, for or against the measure, at the March 9 meeting.

“For the people who live back there [adjacent to the hospital property], what input do they have in this,” asked Councilman Roy Sharpe.

“They played a significant role; a lot of them attended [a Planning Board meeting] and a lot of them expressed concern about their safety and property value,” Holloman answered.

Councilman Charles Freeman suggested tabling a decision on the proposed ordinance until a time where, “we can have a face-to-face [meeting] where everyone involved can say what’s on their mind. This is a very important issue.”

His suggestion was placed into a motion and approved.

McDuffie said the issue will be placed on the Council’s agenda at their next meeting, which is scheduled for Tuesday, April 13.