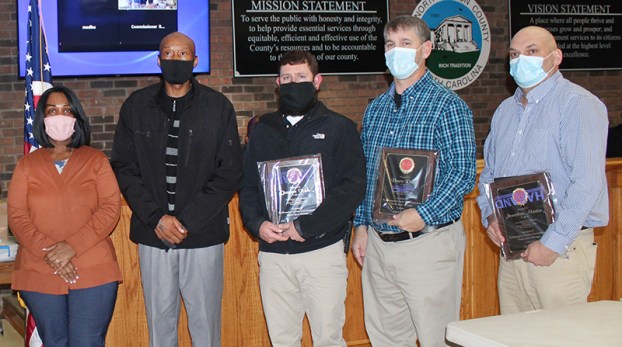 Tika and Michael Ellis (at left) stand with their rescuers: Grayson Toms (center), Bruce Davis, and Jonathan Martin (right). The trio of Conway firefighters freed the husband and wife from their overturned and partially submerged vehicle after it was involved in an accident on an icy road on Jan. 31. Staff Photo by Holly Taylor

JACKSON – Three members of Conway’s Volunteer Fire Department were honored here at the Northampton County Board of Commissioners meeting on March 15 for a life-saving rescue they performed earlier this year.

Firefighters Jonathan Martin, Bruce Davis, and Grayson Toms responded to a 911 call about a vehicle accident on Jan. 31. When they arrived on the scene, they helped remove the travelers from their overturned car, which was partially submerged.

“Three brave firemen went into the water and were able to extract Mr. and Mrs. Ellis, and that’s why we’re here today. We want to honor these brave firemen, these heroes, who stand in our midst,” said Northampton County’s Interim Emergency Management Coordinator Tony Burnette at Monday’s meeting.

“On Jan. 31, in the early morning hours, we had ice on the road at that particular time,” Burnette explained. “Mr. and Mrs. Ellis were traveling on Highway 158 outside of Conway, and they lost control of their vehicle.”

According to Burnette, the vehicle landed upside down in water in a ravine, and the occupants were trapped inside. A passerby happened to witness the accident and quickly called 911 for help. That’s when Conway Volunteer Fire Department and other first responders were called to the scene.

Michael Ellis and his wife Tika also attended Monday’s presentation to express their gratitude to the firefighters.

“It’s a blessing to be here today,” said Ellis. “I know the firefighters said they’re just doing their job, but to my wife and I, they saved our lives.”

“You’ve got to cherish life for what it is,” he continued. “They say ‘here today and gone tomorrow’, but that could be today. So we want to say thank you so much. If it wasn’t for you, we wouldn’t be here.”

Burnette and Commissioner Board Chair Charles Tyner presented the three firefighters with plaques and a resolution signed by State Representative Michael Wray.

“We want all the fire departments to know we appreciate them. And we’re doing all we possibly can to help them, and they can continue to help our citizens,” said Tyner.

By CHERYL DELOATCH Correspondent AHOSKIE – On Friday, February 26, VaShaun Tremaine Smith, Jr. died in a shooting at his... read more