AHOSKIE – On Friday, February 26, VaShaun Tremaine Smith, Jr. died in a shooting at his home. This tragedy saddened those who knew Smith because he touched the lives of those who knew him in a positive way.

“VaShaun was a great kid,” said Dr. Jayson Leach, current principal of Hertford County High School. “He was the first student I met when I came (in December 2020). He made an effort to come and speak to me. He was an all-around good kid. 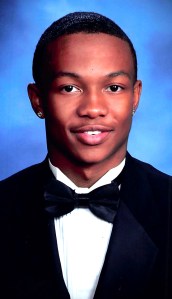 “I will start a leadership council (for the students),” Leach continued. “VaShaun would have been a member. He was well-rounded and definitely the model student.”

Smith had been accepted to North Carolina A&T State University, which made the principal, also an A&T alumna and football player, proud.

“He had talked about playing college football. I was glad to have met him,” Leach said.

“VaShaun was a very good student – he had a 3.9 grade point average,” Cooley noted. “He was a hard worker and was very well-mannered – you don’t see that too much anymore. He lived for Christ, and his presence made a difference.

“I’m also his neighbor,” Cooley continued. “I would see him playing in the yard, riding his motorcycle with his buddy Kyree. VaShaun was always looking for the next thing to do.”

Smith’s murder was a hard pill to swallow for those who knew him.

“His death pricked my spirit,” Cooley admitted. “I don’t want his death to be in vain. We have a lot of good people in the community. I’ve spoken with other community leaders, and we’ll be doing something for the young people soon.”

“VaShaun was one of our seniors, a member of the Beta Club and several other clubs. He was an all around nice kid with a bright smile and a bright disposition. He was helpful with students and staff. He was a really a good kid,” Swain emphasized. “He will definitely be missed. VaShaun had a real impact on his classmates. He had a bright attitude.”

Smith’s impact was felt in athletics as well, as the athletic director and a coach at HCHS discussed.

“VaShaun was the defensive outside linebacker. He was small but had the heart of a lion. He was one of the toughest kids in the football program,” Simmons stated.

On the junior varsity basketball team, Simmons said Smith was more of a defensive player.

“He was one of my better defensive players. He was a better human being than an athlete. VaShaun had very good manners and got along well with everyone,” Simmons stated.

“His position on the football team was more of a safety,” Saxby said. “All four years, VaShaun always found a way to impact the game in a positive way. He always made the right play. At A&T State University they had made plans for him to try out for the football team.

“I would like to thank everyone for all the love and support shown after his passing through the candlelight vigil, walk and parade,” the HCHS coach added.

The pastor of the church that Smith belonged to also reflected on this teenager’s influence.

“Shaun (as he was called in the church and his home community) was a light to young people, a role model,” said Rev. Elliott Hill, pastor of Mt. Sinai Missionary Baptist Church in Como. “Shaun was well mannered to the elderly. I believe he knew the Lord and it showed in his church participation.”

Smith played the drums for the church’s Youth Choir and served in the Youth Ministry.

“Shaun was two years old when I came to Mt. Sinai,” Rev. Hill continued. “He was one of my babies, and I watched him grow up and mature. He would always make sure to come speak to me and my wife, Linda, every Sunday.

“VaShaun was a smart young man with good morals,” Hill added. He had a good head on his shoulders.

“To know Shaun was to love him. He was a wonderful child, and his death shocked everyone. When I got the call that Shaun had died, I had to leave work. He had a very bright future, but it’s brighter now because he’s with the Lord,” the pastor concluded.

Elderly people were also impressed with Smith’s demeanor. The now late Susie Monger Deloatch had shared this recollection prior to her death in 2017. During a worship service in 2015 while Smith was playing the drums, Deloatch said, “Shaun helps me find the scripture and responsive readings when my daughter is working. He is a sweet child.”

Other church members also observed Smith’s kindness. During the annual pastoral anniversary, one member noticed Smith assisting elderly male members carrying dishes to another member’s car following the repast. Smith took the initiative to help the elderly men and then asked if he could assist with anything else.

“Shaun was a mechanic, musician, barber, mentor to at-risk youth, and washed and detailed cars,” Harrell said. “He played basketball and football, track, and took care of his younger sister Camille (also known as Baebae). Shaun was also an assistant junior varsity basketball coach at Ridgecroft School. He was taking a class at Roanoke-Chowan Community College (RCCC) to become a certified nurse’s aide (CNA).”

Harrell recalled that since the fourth grade, her son had talked about becoming a doctor.

“But on January 1 of this year, he told me he wanted to be an engineer,” Harrell explained. “He had planned to major in engineering when he enrolled at A&T this fall. But since he’d already signed up for CNA class, he went on and took it.”

Harrell shared that her son belonged to several clubs at HCHS, including Future Business Leaders of America (FBLA).

Smith had a close relationship with his sister ‘Baebae.’ Harrell recalled,

“Shaun and Baebae did everything together — dance, sing, homework, grocery shopping,” said Harrell. “When Shaun went somewhere, he always took her, only her. They sang together in the Youth Choir at church and loved doing Tik Tok together.”

“Shaun loved his family and friends,” she explained. “He didn’t have a certain type of friend – he loved everyone, including people with disabilities. If he couldn’t help a person, he didn’t bother them at all.”

“He would go to RCCC in the morning for CNA class, pick up Baebae from virtual school at her grandmother’s house, then come home and do his homework,” she said. “He would then work on his car or eighteen-wheeler, go to football practice, call me to see if I needed anything, ask what I had cooked, come home and get ready for the next day.”

“Shaun wanted to be successful,” Harrell recalled. “He always said he wanted to make his parents proud.

“I realize it’s not how long you live but how well you live,” Harrell continued. “Shaun paid the bills – we taught him how. He cooked and cleaned. He always said, ‘If I can’t buy it twice, I don’t buy it.’ For example, if something cost sixty dollars and he only had sixty dollars, he would not buy it.

“We didn’t allow him to wear sagging pants,” his mother recounted. “I wanted him to do well in life.”

Smith’s father, Malcolm Harrell, shared his son’s personal motto, explaining his outlook on life. Smith had written this in 2019 and it states in part, “I feel the reason I was put here was to make a lasting mark on someone’s life… My goal is to remind people the world is still full of caring people, to show others that being a well mannered person is okay, and to teach all young men how to be family men. Touching a life and lending a hand is what the world needs.”

“Shaun leaves a legacy of treating people right,” his mother emphasized. “He believed in being honest and always giving one hundred ten percent.”

She discussed the family’s next step.

Her message for society is to, “just stop the violence.”

A scholarship is being established at HCHS in Smith’s memory. Interested people may contact Terrance or Shelly Saxby at 252-396-1033 for further information.