Bears are flat in loss vs. Northeastern 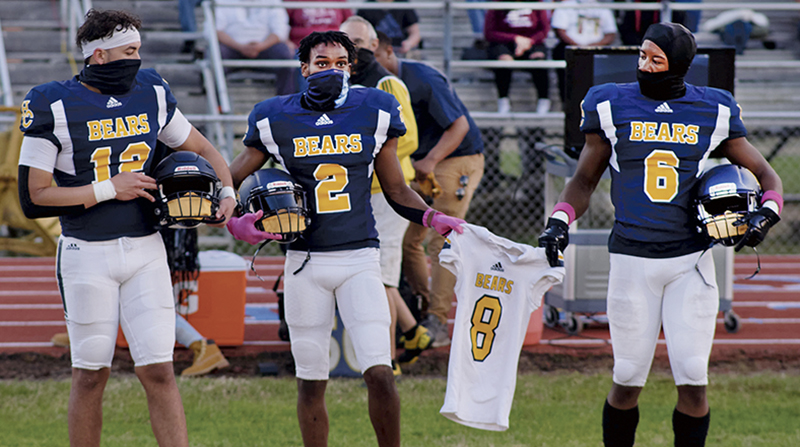 Hertford County High School football tri-captains – from left, Tye Saxby, Quintin Wright, and Kyree Pitt – represent their teammates by carrying the jersey of the late VaShaun Smith, Jr. out to midfield for the pre-game coin toss on Friday evening. Smith, a senior linebacker for the Bears, was murdered on Feb. 26 outside his Ahoskie home. A.A. Imaging / Andre Alfred

AHOSKIE – It’s painfully obvious that Northeastern High School has Hertford County figured out when it comes to the sport of football.

The Eagles invaded Bears Stadium on Friday night – part of a delayed and shortened season due to COVID-19 – and traveled back to Elizabeth City with a 32-6 victory in tow.

Other than a couple of early visits to the red zone – both coming off poor Northeastern punts after the visitors were pinned deep in their own territory – and a late touchdown drive in the fourth quarter, Hertford County was simply overmatched on this particular night.

With a non-existent ground game (16 attempts for minus seven yards), the Bears could only muster 119 yards of offense, which came through the airwaves. Even there, senior quarterback Tye Saxby struggled as he came under heavy pressure from the Eagles defense. He was sacked twice, and threw while on the run for most of the night, completing 15 of 36 passes.

His longest completion was 30 yards, which was the Bears only score of the night on a pass to sophomore Jahaun Bond with 2:41 left in the game.

The Bears also hurt themselves with penalties….flagged 14 times for 83 yards. That led to a dismal 3-of-13 effort on third down tries, and one of those came thanks to a 15-yard penalty on the Eagles. HCHS also failed to move the chains on a trio of fourth down attempts.

Meanwhile, Northeastern, who entered the game with an 0-2 record, overcame a sluggish start of their own to account for 345 yards of total offense. The Eagles, led by senior quarterback Deandre Proctor, threw for 216 yards and had 129 yards on the ground. Proctor was 13-of-24 passing with three touchdowns and added 48 rushing yards on 12 carries.

Northeastern had a 50 percent efficiency rating (6-of-12) on their third down attempts.

After a scoreless first quarter, Proctor directed the Eagles on a pair of scoring drives in the second period that allowed the visitors to hold a 13-0 halftime lead. His 61-yard bomb to Jordan Jones highlighted a seven play, 77-yard drive capped by Rashawn Lister’s two-yard TD run and James Hornthal’s PAT kick for a 7-0 lead at the 9:41 mark of the second quarter.

Proctor added another 30-yard TD pass at the 5:36 mark of the third period, this one to Jerron Hinton. The conversion run failed, but Northeastern’s lead increased to 19-0.

The Eagles scored twice in the fourth quarter to seal the win – a seven-yard TD pass from Proctor to Alandas Williams Jr. and a 13-yard run by Qua’mir Webb.

Hertford County avoided the shutout in the final four minutes by driving 57 yards in six plays. Saxby was 3-for-3 passing on that drive, to include finding Bond slipping behind the defense for the 30-yard score.

Set up by a Justin Powell’s return of a short Northeastern punt, the Bears threatened early as they launched a drive from the Eagles 15 yardline. But the Bears couldn’t gain any offensive traction and lost possession on downs at the same spot four plays later.

Another shanked Northeastern punt followed, allowing HCHS to set up shop at the Eagles 31 yardline. The ensuing drive showed early promise thanks to a 22-yard screen pass from Saxby to Tyree Coatney, but it lost steam from that point and ended with an intentional grounding penalty on fourth down that gave Northeastern the ball at the 23 yardline.

The Bears (1-1 overall and 0-1 in conference play) return to action this Friday (March 19) at home vs. First Flight High School. Kick-off is set for 6 p.m. and fans can attend in limited numbers.

Conway singer pursues his dreams on The Voice