During his years in the ministry, Rev. Mike Willard offered aid and comfort to those in need. 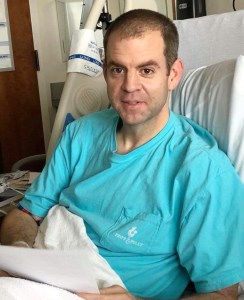 Willard, the former pastor at Greens Cross Baptist Church near Windsor, is fighting to recover from several ailments he has suffered through over the past several years.

“This year, Rev. Mike had to be admitted to the hospital in Durham for longer term hydration and nutritional interventions,” said his friend, Misty Gibbs, a Bertie County native and former Assistant County Manager. “He has had a nasal feeding tube placed and in two weeks will have a longer term stomach feeding tube placed.”

Gibbs said that due to these setbacks and illnesses, Willard has used all his sick leave and vacation time at his full time position of serving as a Hospital Chaplain.

“He will face more days off in the next couple of months and needs our help to get his family through this tough time,” Gibbs said.

Gibbs has organized a fundraiser at GoFundMe for Willard. Donations can be made by using this link: https://gofund.me/e4b149c6

“Please share what you can,” Gibbs stated. “No amount is too small.”

She recalled his pastorate at Greens Cross Baptist Church.

“He was among those who helped lead the way to help those affected by the devastating 2011 tornadoes that killed 12 people in Bertie County and destroyed at least 67 homes,” Gibbs said.

“He was a founding member of the Bertie Interfaith Relief and Recovery Team (BIIRT) and also Chairman for a time,” she added. “Reverend Mike worked tirelessly to help make the community whole again. He has the heart of a servant and puts that heart to work wherever he goes.”

Gibbs said Willard has suffered “many difficult medical setbacks since August 2017, then contracting COVID-19 in December.”

“Reverend Mike has been admitted to the hospital again and now requires a stomach surgery,” she remarked.

Gibbs said Willard underwent surgery in August of 2017 due to difficulty swallowing and other issues.

“This surgery worked out well. However, a month after that he had a gastric leak and had two more surgeries to fix those issues,” Gibbs noted. “In 2018 his esophagus and stomach opening continued to have stenosis and he required many throat dilations and laparoscopic surgeries to keep these areas open and to cut away adhesions that kept forming.”

From 2018 to 2019, Gibbs said her friend had over 30 different surgeries and procedures along with three PICC lines for nutrition.

“In 2020 things were looking better but he ended up having difficulty maintaining nutrition and hydration. By August he had to have another PICC line placed,” she said.

Gibbs encouraged everyone to help Rev. Willard in his time of need.

RALEIGH – For the second time in the course of one week, a Hertford County High School senior has lost... read more