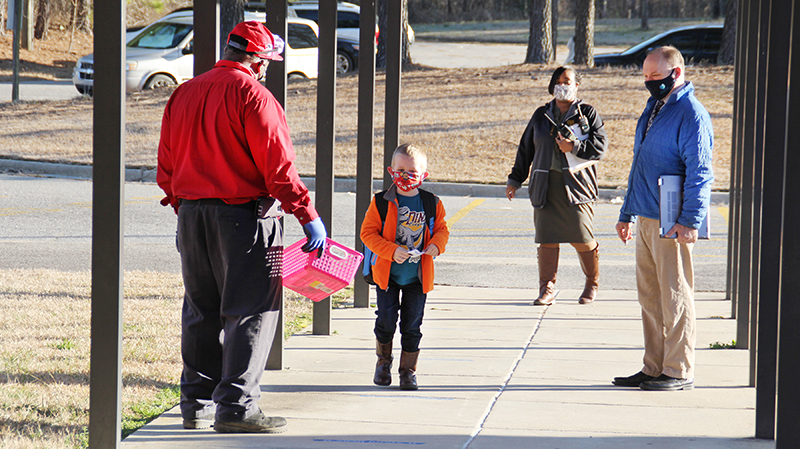 MURFREESBORO – It’s been nearly one year since the classrooms here at Riverview Elementary School served as the weekday home of local students.

On Monday morning, 30-or-so students entered the building for the first time since March 14, 2020. This comes after the Hertford County Board of Education approved a plan in late February from Superintendent Dr. William T. Wright Jr. that calls for students to return to in-person learning under Plan B, which requires social distancing and a hybrid attendance schedule for those families that chose to do so in a survey that was presented to the Board of Education on Jan. 21.

“We are so, so happy about having our kids back with us,” stated Riverview Principal Lee Ford. “We’ve missed them; they’ve been away too long and we’re so excited to see all those smiling faces.” 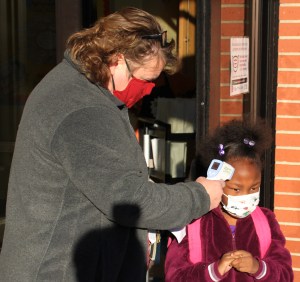 A student’s forehead is scanned to check body temperature by Riverview school nurse Julie Hill on Monday, part of the health and safety protocols now in place. Staff Photo by Cal Bryant

Ford said everyone at Riverview is following the back-to-school guidelines as established by the Centers for Disease Control (CDC).

Riverview Assistant Principal Terrell Deloatch was among the staff welcoming the arrival of the students on Monday. She ensured they were following the proper health and safety procedures that have been put in place.

“For the students arriving by bus, they are allowed to exit one at the time,” Deloatch noted. “They then follow the sidewalk, marked for social distancing, and present their symptoms checklist ticket.”

Using an electronic scan of their foreheads, Deloatch added that a monitor checks the body temperature of each student when they first get on the bus.

“Their temperature is taken again by the school nurse at the entrance of the school. Once that screening is completed, they pick up their breakfast and report to their classroom,” she said.

For the students who are transported to school by their parents, Deloatch explained they are not allowed to exit the vehicle until a screener, using the same type of device, takes the body temperature of the child.

“If the temperature is okay, they are clear to present their symptoms checklist. The student is then directed into the building where they pick up their breakfast and report to their class,” Deloatch stated.

Of the 360 students enrolled at Riverview, 35 returned on Monday.

“Since we have a low enrollment, we only have one cohort here at our school, so we are only in class on Monday and Tuesday of each week,” Deloatch noted. “The other students are receiving instruction remotely every day (Plan C), either by a home computer or by written packets for those without Internet access.”

It was reported that the number of returning students at Bearfield Primary School will cause half to attend classes on Mondays and Tuesdays while the other half will use Thursdays and Fridays for their face-to-face learning.

Dr. Wright said he was pleased to see the children back in class.

“Students and staff were so excited on Monday; it’s a day we’ve been planning for and looking forward to,” he said.

Families who have chosen to have their students remain on Plan C will still have the option to do so.

In response to the financial hardship that some families are facing because of the pandemic, the Hertford County Board of Education has elected to suspend the requirement of student uniforms for the remainder of the 2020-2021 school year only. Students whose parents have purchased uniforms can still wear them. In fact, the school board encourages them to do so if they already have them. Students who choose the option of not wearing uniforms must comply with Hertford County Public Schools Dress Code Policy 4316.

Back to school updates will be provided on local cable channel 19, at the district’s webpage at www.hertford.k12.nc.us and at each individual school’s website.