‘Guns Down, Bikes Up’ 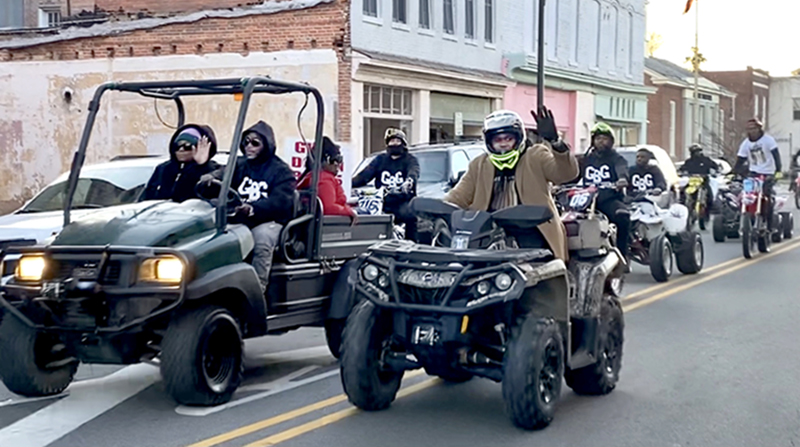 AHOSKIE – Thursday, March 4 was to be a special day in the young life of Vashaun Tremaine Smith Jr.

The outside linebacker for the Hertford County High School Bears was scheduled to begin his senior season that night, joining his teammates on a trip across the state line to pay a non-conference visit to Southampton County (VA) High School in the delayed opener for both teams due to the COVID-19 pandemic. 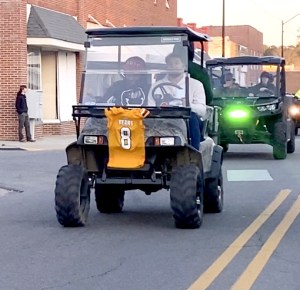 Vashaun Smith’s high school football jersey (#8) hangs from the front of this ATV at Friday’s parade. Photo by Pierre Vaughan

Smith didn’t make that trip….his life was cut short when he was shot and killed on Friday, Feb. 26 at his home on the outskirts of Ahoskie.

One week later (Friday, March 5), a mighty roar echoed off the buildings of downtown Ahoskie as 100 or more motorcycles and ATV’s participated in a rolling tribute to Smith.

The motorized parade was hosted by the GBG Bike Group.

“For awareness purposes, family comfort, and to end gun violence in our community, GBG put together a community event called ‘Guns Down Bike Up’ which included a ride of all different type bikes from ATV’s, dirtbikes, motorcycles, and golf carts,” stated GBG president Andre Lyles. “Participation included our local community, outside cities, bike clubs, and more.”

Lyles said he strongly believes the event enabled the anti-gun/anti-violence message to spread throughout the community as well as bringing much comfort to the family’s hearts.

“The group wanted to do something positive for our great friend and for our community,” Lyles stated. “We are losing too many good people to gun violence in our city and we all must pull together and force change.

“Ahoskie showed how much love is in the city for the family by crowding the streets to make this event successful. Now we must all put that same energy to provide a safe community to live in,” Lyles added. “Thanks to all who supported us. This isn’t the end of community events. Malcolm and family, the entire city is behind you guys. Put the guns down.”

Lyles said there was another reason behind the event.

“Shaun wanted a bike so bad, but his parents wanted him to wait after he finished participating in sports. So we are going to ride for him, and do it the right way,” Lyles remarked.

Smith’s father, Malcolm Harrell, said to Lyles about the event, “The wife and I really appreciate what you guys put together for us. It really brought justice to our hearts and showed how many people love Shaun. Keep things like this going, kids around here need it.”

Pierre Vaughan put together a Youtube video of the event, which can be found at this link: