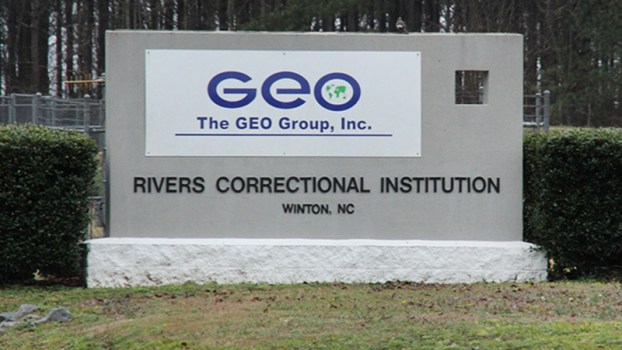 WINTON – The Hertford County Board of Commissioners have approved a two-sided plan aimed at saving 400 jobs at Rivers Correctional Facility (RCI) while preserving a sizable amount of the county’s tax base.

At a recent meeting, the board approved two measures: a services contract with the GEO Group, Inc. and an intergovernmental agreement with the United States Marshals Service.

However, a campaign promise made by President Joe Biden may put the brakes on Hertford County’s plans. In an Executive Order signed recently by the president, Biden made it clear he does not support privately operated criminal detention facilities under contract with the federal Bureau of Prisons (BOP).

Late last year, the BOP opted not to renew its contract with the GEO Group to operate RCI. That 10-year contract expires at the end of this month. RCI opened in 2001 and its original contract with the BOP was renewed on March 31, 2011. Under the terms of that contract, RCI would house up to 1,450 BOP inmates from the Washington, DC area.

Hertford County officials, meanwhile, were searching for ways to keep RCI open, an effort that is beneficial from the standpoint of preventing the loss of hundreds of local jobs and maintaining the property taxes paid to the county by GEO.

In their agreement with Hertford County Local Government, the Marshals Service will use RCI to house males, females, and juveniles charged with federal offenses and detained while awaiting trial, those who have been sentenced and are awaiting designation and transport to a BOP facility, and those who are awaiting a hearing on their immigration status or deportation.

As stated in the agreement, “the Local Government/Rivers Correctional shall accept and provide for the secure custody, safekeeping, housing, subsistence and care of federal detainees in accordance with all state and local laws, standards, regulations, policies and court orders applicable to the operation of the Rivers Correctional.”

Hertford County, in turn, will subcontract with the GEO Group and pay them the same per day rates to make beds available at RCI for the purpose of housing and caring for the federal detainees.

The GEO Group will also maintain and provide evidence of a comprehensive and adequate plan of insurance coverage.

“What we’ve done at this point is that the commissioners have agreed, in principle, to the contract and the agreement should a deal be reached between all parties,” said Hertford County Manager David Cotton. “The contract with GEO is contingent on the agreement between the county and the Marshals Service. If and when that agreement is reached, then all parties can proceed with signing the documents.

“What this all boils down to is the Marshals Service convincing the Department of Justice and the Bureau of Prisons that this type of detention facility is needed,” Cotton added.

The county has worked on these plans for the past few months.

“I initially reached out to GEO to see what the county could do to keep them open here,” Cotton said. “Once we began conversations on a plan, we were both aware of what the Biden administration was going to do in regards to his recently enacted Executive Order. We were looking for a way to circle around that.

“At the forefront of our conversations was keeping these jobs,” Cotton continued. “There aren’t enough employment opportunities here for those individuals to find another job. That was one of the key points our commissioners talked about when we brought them up to speed on our plans.”

All the county can do at this point forward is wait and see if a deal can be forged at the federal level.

RICH SQUARE – One man was arrested following the execution of a drug search warrant here Wednesday in the 1600... read more