AULANDER – A standoff between law enforcement officers from four local agencies and a suspect wanted for crimes in two counties ended without incident here Sunday. 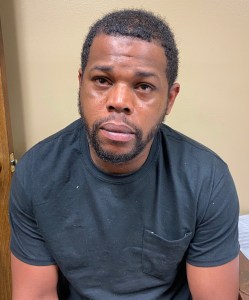 After avoiding arrest by locking himself inside an Aulander residence for an hour, Kendrick Maurice Williams, 33, of Tarboro peacefully surrendered after learning that a police canine was at the scene, according to Aulander Police Chief Jimmy Barmer.

“We wanted this situation to come to a peaceful end, especially knowing there was a juvenile inside that residence,” Barmer said. “I don’t know how long this would have lasted, but just as soon as Mr. Williams heard the police canine barking, he hollered to not let that dog loose. He laid down inside the back door of the home and we were able to go in at that point and place him under arrest without any trouble.”

Due to the fact that Williams had eluded arrest by running from Barmer after committing a crime on Feb. 12 in Aulander as well as the fact that he had numerous outstanding arrest warrants in Edgecombe County, Barmer took extreme caution in serving his warrant on Williams this past Sunday. A trio of Bertie County deputies – Tyrone Ruffin, Colter Lipscomb, and Dakota Young – joined Barmer outside the residence, located at 308 West Main Street, lot 4.

“When Mr. Williams realized that we were there, he stuck his head out the back door, slammed it shut, and locked it,” Barmer said. “After pleading with him over the [police car] intercom to surrender, we didn’t receive any response.”

Two additional officers arrived, Joey Parker with the Ahoskie Police and Jessie Mizelle of the Windsor Police, but Williams still refused to surrender. 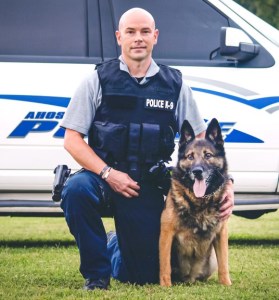 Ahoskie Police Sgt. Clifton Whitby and “Rico” are credited with bringing a standoff in Aulander to a peaceful conclusion on Sunday.

“That’s when a decision was made to bring in [Ahoskie Police] Sgt. [Clifton] Whitby and his canine, Rico,” Barmer stated. “That plan worked. Sgt. Whitby did not have to deploy Rico. Mr. Williams heard that dog barking and that’s all it took. There was no use of force. The canine saved us from getting into any sort of physical confrontation with Mr. Williams.”

Williams was charged with larceny from the Family Dollar, where he is accused of stealing beer on Feb. 12, and two counts of RDO (Resist/Delay/Obstruct) – one from Feb. 12 (where he ran after being approached by Barmer in the Family Dollar parking lot) and the other due to the standoff on Sunday.

Williams was also served outstanding arrest warrants from Edgecombe County on charges of assault on a female, violation of a court order, communicating threats, resisting a public officer, driving while license revoked, and failure to burn headlights.

A female at the same residence, 35-year-old Cherri Campbell, was arrested for misdemeanor larceny at the Aulander Family Dollar (also on Feb. 12) and RDO for the Sunday incident. She was given a $1,000 secured bond.

Barmer said the juvenile at the home was placed in the secured custody of a family member.

“Being a small town police force with a lot less manpower, it’s great to have the cooperation of the other departments. I thank Bertie Sheriff John Holley, Ahoskie Police Chief Troy Fitzhugh, and Windsor Police Chief Justin Jackson for providing me with the manpower needed to bring this case to a peaceful end,” Barmer concluded.