Straight from the ‘Hart’ 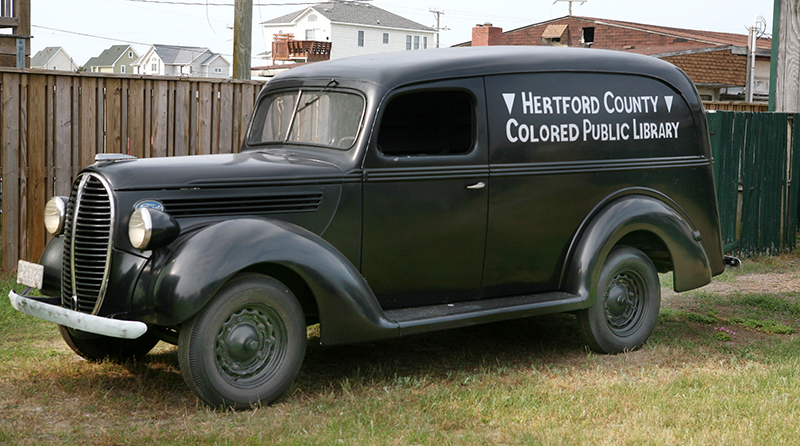 The original bookmobile operated by the now late Katie Hart is fully restored and efforts are currently underway to bring it back to Hertford County. Photo by Marvin Jones

WINTON – Beginning in the late 1930s, kids interested in reading books didn’t always have to travel to the library to check them out. Instead, the books came to them.

Katie Hart, a Black teacher supervisor from Winton, started a bookmobile to expand access to books to children in Hertford and Gates counties. A recent history presentation given by Marvin Tupper Jones of the Chowan Discovery Group and Caroline Stephenson of the Cultivator Bookmobile shined a spotlight on Hart’s literacy efforts. Museum of the Albemarle hosted the virtual event.

“Ms. Hart was such an inspiration in so many ways,” said Stephenson. “She was way ahead of her time. She saw the need.”

According to Jones, Hart was born around 1899. She attended school at Waters Training Institute (known later as the C.S. Brown school), and then continued her education in college. By the 1930s, she was a teacher supervisor for Hertford County, which meant she helped teachers improve their educational methods. At that time she had a small library in her office.

In 1938, however, she decided to take that library on the road, expanding its service by taking the books directly to the children attending Rosenwald schools throughout the county. While the main focus was to provide book access to Black children, Jones noted that she would often loan books out to anybody, regardless of their race.

“It started out as an independently funded bookmobile,” Jones explained, adding that the county and the state later provided some funding to keep it going, which helped expand its service to Gates County as well.

Hart was also instrumental in starting the first Black library in Hertford County in 1941. She purchased the land for the library and then donated it to the town of Winton, so they could use federal funds to construct it. But even though there was a brick-and-mortar place to visit, she continued operating the bookmobile until her retirement in 1969 when the two libraries in Winton consolidated and joined the Albemarle Regional Library system.

ARL Director Hugh Davis spoke to the News Herald about Hart’s contribution to promoting literacy in the area.

“I’ve always found it wonderful, perhaps amazing, that there was a public county library for African-Americans in Hertford County before there was one for whites, and that was thanks really to Ms. Hart’s powerful drive and work ethic,” he said. “She provided for all and certainly is a library and literacy hero.”

Hart drove two different bookmobiles throughout the decades it was in operation. Jones recalled seeing the later version, a powder blue car, drive through his hometown of Cofield in the 1950s and 1960s.

But Jones also got a glimpse of the original bookmobile a couple years ago when he met the current owner who restored the 1938 Ford station wagon.

“When I first saw it, I was pleased to see it was in such good shape,” he explained, adding that even the shelves in the back were still intact.

Jones said he thought it might be the only African-American bookmobile still in existence today, and he expressed a desire to have it on display somewhere in Hertford County. Plans in the past, however, fell through but he, along with Stephenson and others, are renewing efforts to bring the bookmobile back home.

“We would need a proper, indoor place to display it,” he told the News Herald. “I would love to see storytellers and librarians sitting in the back of the bookmobile reading stories to children. Any way we can promote learning and our history of learning withing the county is important.”

“Ms. Hart’s library was something that we didn’t have before, and that was a great asset,” he added.

Though the effort to bring Hart’s bookmobile back to Hertford County is ongoing, there are other ways her literacy legacy still lives on.

“She was our inspiration,” explained Stephenson, who started the nonprofit Cultivator Bookmobile last year after their brick-and-mortar bookstore in Murfreesboro shut down as a result of the COVID-19 pandemic.

“Katie Hart had her bookmobile all those years ago, and if she could do it, we could do it too and still fulfill our mission of getting books to the people,” she continued. “She had the right idea, in terms of being out in the streets.”

Cultivator Bookmobile serves Hertford, Bertie, and Northampton counties, and usually has about two stops each month for book giveaways. They also sponsor food distribution events, and eventually plan to reopen their bookstore later this year.

Not only was Hart’s bookmobile an inspiration to Stephenson, but the two bookmobiles also share a connection through the Lend A Hand Book Mission, based in Boston, Massachusetts. At some point during its operation, Hart was able to receive some books through the Boston organization. Last month, Cultivator Bookmobile also received a grant from the group as well to help continue their work.

“I’m really thankful for Katie Hart. She had this incredible vision,” Stephenson explained. “She was an African-American woman, and there were many obstacles during that time. But she was bound and determined to navigate around that so she could still serve.”

Hart passed away in 1984 and is buried alongside her husband in Winton. But her efforts to bring books to the people have not been forgotten.

Back to school plans announced