AHOSKIE – Daylan Askew, a senior guard for Hertford County High School, has reached a plateau very few will ever see.

On Feb. 16 during a home game vs. Currituck County, Askew scored the 1,000th point of his high school career. 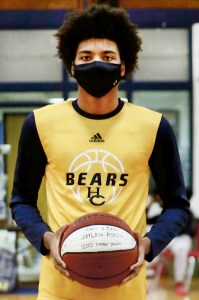 “It felt good about reaching 1,000 points in my career,” said Askew, who is averaging 22 points per game for the Bears this season. “It’s a big accomplishment; all the hard work is paying off, and I’m making my family proud.”

Veteran HCHS head coach Charles Simmons made sure that Askew was recognized, awarding him a basketball bearing information about reaching the lofty achievement.

“Daylan has been our leader this year,” Simmons said. “He’s been a member of our varsity program since his sophomore season and has accomplished a lot for our program since that time.”

Askew was a First Team All Conference selection last season. He was also named to the All Region Team.

Simmons said Askew is being recruited by several NCAA Division II schools, to include Elizabeth City State University. He also has offers from some junior colleges.