From love to tears 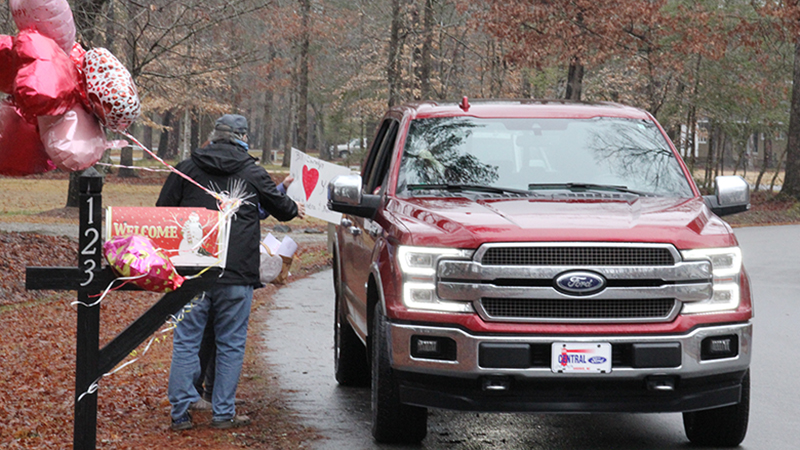 On Valentine’s Day, people paid their respect to Ahoskie Food Pantry Director Bill Arrington during a drive-by of his home. Arrington died the next day (Feb. 15) after a battle with cancer. Staff Photo by Cal Bryant

AHOSKIE – It was a perfect day to show affection towards a local man who for years had volunteered his time to help those in need.

However, one day later, that affection turned to tears.

Numerous vehicles made their way to Bill Arrington’s home on Sunday, Feb. 14, stopping to honk the horn, wave, and leave a card or poster in an effort to say thank-you for all he had done as the volunteer director of the Ahoskie Food Pantry.

Arrington sat inside his home, stationed in front of a large window where he could personally witness all the accolades.

On Monday, Arrington passed away after his bold battle against cancer. He was 83.

“We’ve lost a great man,” said Tommy Mitchell, part of the all-volunteer staff at the Food Pantry. “Bill was a fine man, a Christian man, who helped a lot of folks over the years.”

Mitchell noted there are many volunteers at the Ahoskie Food Pantry, “but to those who were the recipients of those food items, Bill Arrington was the face they saw the most.”

“I’m so glad we were able to do what we did for him on Sunday,” Mitchell said of the drive-by salute.

On Sunday, David and Sally Barnes greeted the drivers and passengers in each vehicle.

“He (Bill) is deserving of all this,” said David Barnes during a brief pause between the arrival of the vehicles. “What a great, great man.”

Barnes said his association with Arrington dates back six to eight years.

“I remember him before I started volunteering at the food pantry, but I really got to know him better after that,” he said. “His shoes at the food pantry are going to be hard to fill, but we will honor the legacy he started there.

“He’s helped a countless number of people,” Barnes continued. “He’s met people at the pantry after regular hours and even used his own money to keep things going there.”

Prior to his declining health, Arrington was an active member of First Baptist Church of Ahoskie where he was on the Board of Deacons.

“Bill was a quiet leader who was widely respected,” said Arrington’s pastor, Rev. Dr. Trey Gilliam. “He was the type of man whose actions spoke louder than words.”

Gilliam said Arrington was typically quiet and reserved during meetings of the Deacons….that is until the subject turned to the food pantry.

“That was his passion, and he would talk about the food pantry for hours,” Gilliam stated. “He felt that no one needs to go hungry, and he never judged anyone who showed up in line for food.”

“His love and respect of his wife, Carolyn, is a fine example for others to follow if they wish to have a happy marriage,” Gilliam stressed.

“They represented the stalwart backbones of the food pantry; they believed in it and its mission to serve,” Rev. Douglas remarked. “They worked tirelessly to ensure the shelves were filled and that people would not go hungry.

“They were always graceful, good humored; nothing seemed to get them to stray from their desire to see the food pantry prosper,’ Douglas continued. “They faced the world with good humor, even when times were tough.”

As already noted, Arrington’s “other love” was the Ahoskie Food Pantry, located at First Presbyterian Church of Ahoskie. Under his leadership, the food pantry expanded from one tiny room at the church to today where it fills nearly one entire wing.

While the pantry served the needs of adults, it was the Backpack Program, which Arrington helped to get up and running, that is among his proudest accomplishments. That program provided approximately 150 meals each week to qualified children attending Ahoskie Elementary, Bearfield Primary, Hertford County Middle, and Riverview Elementary.

Those meals arrived pre-packaged to the Ahoskie Food Pantry from the Food Bank of the Albemarle. They contained milk, juice, “heat-and-eat” cans of beef stew and pasta, and apple sauce. But Arrington and other volunteers would go out of their way to add other items, such as pop tarts, pudding, and cereal bars.

Each Thursday, Arrington would load his pick up truck with those meals and personally deliver them to each school. The students received the meals on Fridays, giving them something to eat over the weekend.

The Ahoskie Food Pantry later added a Summer Backpack Program that helps feed local children in need while they are out of school over the summer months.

Funeral services for Arrington will be held at 1 p.m. on Thursday, Feb. 18 at First Baptist Church of Ahoskie.

His full obituary is published on page 6A of today’s edition.