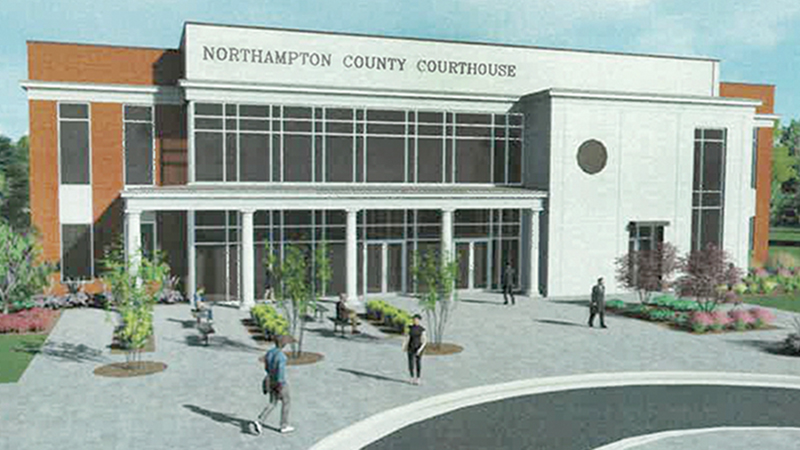 Shown here is architectural concept of the new Northampton County Courthouse. Earlier this week, the county’s Board of Commissioners placed a purchase option on a 10-acre parcel of land in Jackson in an effort to move forward with their plans to build a new courthouse. Drawing by Oakley Collier Architects

JACKSON – The Northampton County Commissioners are taking steps forward in their goal to construct a new county courthouse.

At their regular meeting here on Feb. 15, the board unanimously approved an option to purchase an approximately 10-acre plot of land in Jackson.

“We have two years from today to formally exercise that option,” explained Northampton County Attorney Scott McKellar, noting that an option agreement gives the county an exclusive right to purchase the property if they choose to do so within the next 24 months.

The land in question is located just east of the State Employees Credit Union building on Highway 158 within Jackson’s town limits. It is subject to the town’s zoning requirements.

The seller is listed as Lewis Bull Hill Properties LLC, a locally-owned real estate company. The negotiated price is $65,000 per acre, making the total purchase price $650,000. McKellar later explained to the News Herald, “the Board of Commissioners felt the location of this property was ideal and was satisfied with the negotiated price when compared to prior sales in the area.”

“This is just the first step,” Faulkner stated, emphasizing the importance of a new courthouse for the citizens. “We didn’t enter into these discussions lightly.”

“Our courthouse is unsafe and everybody knows that. We know that we need to make plans for this [new] courthouse,” said Board Chair Charles Tyner.

The conditions of Northampton County’s current courthouse have long been a topic of discussion by the board. Most recently, Superior Court Judge Cy Grant and District Court Chief Judge Brenda Branch spoke at the commissioners meeting on Dec. 7, 2020 to share their concerns and explain the need for a new building.

“The courthouse that we’re currently in is no longer functional and practical for our requirements,” explained Grant at that meeting last year.

He detailed structural problems that have caused issues with plumbing, mold, and bats over the years, but also emphasized security as a major concern.

“To me, it’s a ticking time bomb,” Grant said, noting that the sheriff’s office does well, but the layout of the historic building makes it impossible to ensure safety.

Attempts at remedying problems at the courthouse have been hindered by its status as a historical landmark, meaning that it’s difficult to get approval for changes to the building.

At that same December meeting, conceptual designs from Oakley Collier Architects were unveiled for the new courthouse. The proposed two-story building, which would total 27,200 square feet, is a more modern design than the current courthouse. It would have space for a superior courtroom, district courtroom, a multipurpose room, offices, and more.

Unlike other land options and purchases by the county, there was no public hearing held prior to the board’s decision at Monday’s meeting.

County Manager Charles Jackson said a “Q&A” sheet about the courthouse project would soon be available on the county’s website with more information.