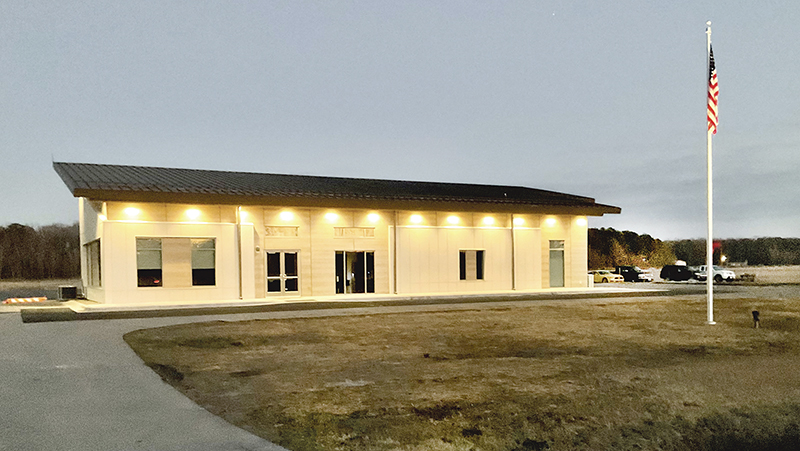 The new terminal at Tri-County Airport formally opened on Thursday of this week after just over one year of construction. The 3,200 square-foot building was completely funded by the state at a cost of nearly $900,000. Photo by Henry Joyner

AULANDER – It took a lot longer than expected – over 20 years to be exact – but Tri-County Airport is now the home of a new and modern terminal.

A ribbon-cutting ceremony was held on Thursday to formally open the 3,200 square-foot building. There are plans to hold a larger celebration, to include a fly-in, as soon as the health safety environment improves due to COVID-19.

“We are absolutely thrilled with this beautiful new facility,” said Tammy Lee, a Bertie County Commissioner who serves as the chair of the Tri-County Airport Authority. “We appreciate all those who played a vital role in helping us get to this point. Without them we wouldn’t be standing here today celebrating the grand opening of the Tri-County Airport Terminal at Henry Joyner Field.” 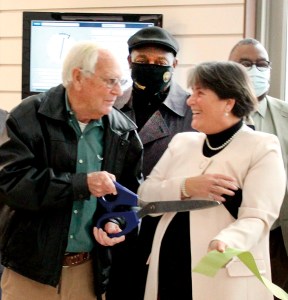 Tri-County Airport Manager Henry Joyner shares a smile with Tammy Lee, chair of the Airport Authority, after he cut the ceremonial ribbon on Thursday to officially open the new terminal. Staff Photo by Cal Bryant

Lee praised the work of Howard Hunter III who represents the local area in the NC House of Representatives.

“He is one of the main people responsible for this building being here,” Lee shared. “The work he did for us in Raleigh, lobbying for this facility, is to be commended. He worked alongside Representative [Michael] Wray to convince our NCDOT/Division of Aviation partners to include this building in their budget.”

For those familiar with the history of the airport, Henry Joyner has been an integral part of its proud past.

“Henry, our airport manager, keeps us all straight,” she said. “He’s been over 40 years. It’s so appropriate that we, the Airport Authority, named the airport Henry Joyner Field. We did that a couple of months ago.”

Joyner said it is the highest honor for an aviator to have an airport their name.

“I started working here in 1973 as a flight instructor,” Joyner recalled. “If you’re not an aviator, you probably wouldn’t understand what an honor it is to have an airport named after you. I want to thank the [Airport] Authority and our local county commissioners for keeping us going here for the past 40-plus years.

“For me and my family, this is where we spent a lot of time together over the years,” Joyner added. “This place is very special to me. I owe a lot to a lot of people; I appreciate everyone for everything you’ve done to get this new terminal.”

Lee also recognized other important partners who played key roles in the construction of the new terminal: Talbert & Bright Engineering/Planning Consultants, The Wilson Group Architects, and Calvin Davenport, Inc. who served as the general contractor.

The building was 100 percent funded ($875,000) by NC DOT Aviation. Meanwhile, the interior design and furnishings came through donations made by other individuals and organizations. They were awarded plaques of appreciation by Biggs.

“We had some very special partners in this endeavor,” Lee said.

“As an economic developer, we’re thankful for what these partners do for our community,” stated Biggs. “We look to these partners for help, not just for this airport but in other times of need as well, and you always come through.”

Paula Farmer was also recognized with a plaque. She is the wife of the late Hertford County Commissioner Johnnie Rae Farmer who served for many years on the Tri-County Airport Authority, to include being the chairman, prior to his death last year.

“Johnnie Ray Farmer is another big reason we’re standing inside this new building today,” said Biggs. “He pushed for this building; he pushed for it for 20 years.”

Tri-County Airport was commissioned in 1963 with the runway paved in 1965. It was built to not only serve local pilots and their aircraft, but also to aid with transportation for many of the businesses and industries Bertie, Hertford and Northampton counties.