Jean was born December 28, 1934. She was raised on the family’s farm near Woodland by her loving parents, A. Marnch Futrell and Edna Terry Futrell, she attended Woodland Onley School where she graduated Valedictorian. During her time at East Carolina University, she met and married Bob Mitchell of Harrellsville, NC. The couple settled in Plymouth, NC where Bob was employed at Weyerhauser, Inc. While in Plymouth, they had three children – Lynn, Ken, and Penny. Jean devoted her time to raising her family and pursuing her multiple passions of cooking, golf, and bridge. Bob’s job moved the family first from Plymouth to Idabel, OK, and then to Eugene, OR, before eventually returning them to Plymouth. No matter where she was or what she was doing, she was universally known as a force of nature. 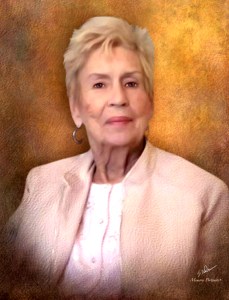 Later in life, Jean married Joseph Justius of Nags Head, NC. They moved to Woodland and operated the local grocery store, JJ’s Woodland Supermarket until Joe’s death in 1992. Jean was elected and served as a town commissioner during this time. In 1994, Jean married Commander Christian Lange, U.S. Navy (ret) of Virginia Beach, VA. They lived in Woodland for a time before moving to Virginia Beach, where she was a member of Baylake United Methodist Church. During her time with Chris she enjoyed working on stained glass projects and traveling, including river tours in Europe and China. Her favorite place was coastal Maine where she never met a lobster she didn’t like.

Jean is survived by her husband Chris; her three children, Lynn Lane & Ron Lane of Woodland, NC, Ken Mitchell & David Kramer of Atlanta, GA, and Penny Beasley & Stewart Beasley of Woodland, NC; her brother, Andy Futrell & Lael Futrell of Seattle, WA; and a host of other relatives and friends.

She was a loving grandmother to Ryan Beasley and wife Sarah of Kinston, NC, and Trevor Lane & wife Carra of Lasker, NC. She was also blessed with and adored her two great grandchildren Winn Lane and Summerlyn Beasley.

The family graciously thanks all the caregivers who helped Jean through her end of life, especially for their heroic efforts in this time of COVID19.

A graveside memorial service is scheduled for Sunday, February 14, 2021, 1:30 p.m., at the Woodland, NC town cemetery, with the Reverend Wallace Phillips officiating.

Flowers are welcome or the family would greatly appreciate memorial donations to the Alzheimer’s Association (www.alz.org).

Garrett-Sykes Funeral Service – Rich Square Chapel is handling the arrangements for the Lange family and online condolences can be directed to the family by visiting www.garrettsykesfs.com.