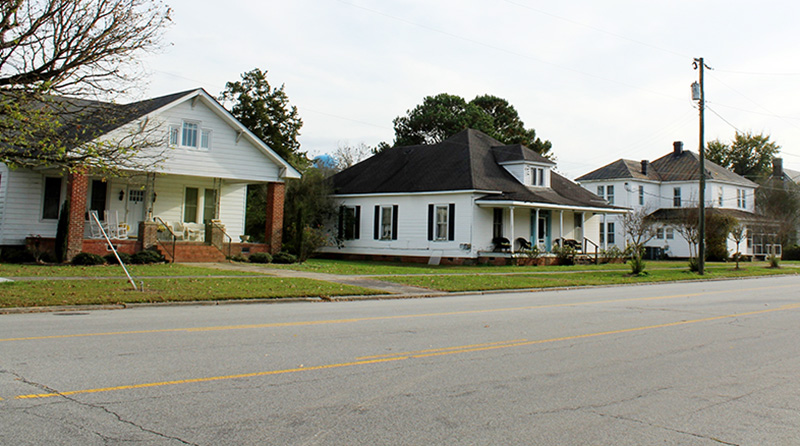 WINTON – A six-year endeavor by a local group of determined individuals was an effort worth the wait.

Last week, the North Carolina Department of Natural and Cultural Resources announced that four historic districts and four individual properties across the state have been added to the National Register of Historic Places. The Winton Historic District was among that short list of newly designated areas.

According to Libby Jones, one of the founding members of the Winton Historical Association, a group of 20-plus individuals have worked tirelessly since 2014 in an effort to gain a place on the National Register.

“Most all of that group are private citizens who put in a countless number of hours to make this happen,” she mentioned. “It’s been a long time coming, but it was all worth the wait.”

Jones added that the association did hire two consultants to assist their efforts.

“It’s worth all we put into it because of all the private citizens adding their recollections and memories of living in Winton,” she said. “We also spent a lot of hours in the [Hertford County] Register of Deeds office, allowing us the opportunity to document the history of those who built and lived in these homes.”

Jones singled out the efforts of Michelle Felton and Sue Woodward.

“They had the North Carolina State Historic Preservation Office come to us in 2015 at which time we really got the ball rolling on this,” Jones noted. “We incorporated [the Winton Historic District] and formed a board. We raised enough money to pay for this endeavor and also managed to save some money to get started on some of the restoration projects.”

According to the documentation by the state, the Winton Historic District includes the majority of extant late-19th and early-20th century resources in the town, illustrating the growth of the town after the Civil War, during which time the entire town was burned.

The documentation was reviewed by the North Carolina National Register Advisory Committee and subsequently nominated by the North Carolina State Historic Preservation Officer, which noted: “The Winton Historic District is locally significant in the area of commerce. Winton served as an important commercial hub for cotton, peanut and corn farmers in Hertford and surrounding counties. The district is also locally significant in the areas of politics and government as the county seat of Hertford County since 1766.”

It further noted that the Winton Historic District is locally significant under Criterion A for Native American Ethnic Heritage, African American Ethnic Heritage, and Education. The C.S. Brown School opened in 1886 as Chowan Academy, a boarding school for students of color and the only high school for students of color in Hertford County until 1937.

The Winton Historic District is significant at the local level for architecture as it contains residential, commercial, governmental, and institutional buildings in styles and forms that illustrate national trends.

Also included as part of the Historic District are local government and educational buildings.

Other than the noteworthy designation of being listed on the National Register, Jones stressed there is another reason to celebrate.

“There are tax credits available for the owners of any non-income-producing structure who wish to invest in renovations,” she said. “We already have several homes that have been restored, mine being one of them. Other homes in town are in the process of renovations, to include roofing and exterior work, while others are waiting to start pending the tax credits.”

For income producing property included in the historic district (commercial or residential rental), a federal tax credit of 20% of qualified rehabilitation expenditures is available. Taxpayers who receive the federal income tax credit are eligible to receive a 15-25% state “piggyback” tax credit against NC income taxes.

While the monetary savings are welcomed for those making investments into renovation, Jones said Winton as a whole is the real winner.

“The mission of our committee is to preserve and promote Winton. We hope this inclusion on the National Register helps us renew and develop our businesses, residences, and community resources,” she said. “We can advertise the fact that we have a historic district and encourage people to come and visit us.”

“The National Register of Historic Places is a vital tool in preserving our state’s treasured historical resources,” said Reid Wilson, secretary of the N.C. Department of Natural and Cultural Resources. “Each time we add new districts and properties to the register, we recognize and celebrate North Carolina’s rich and diverse history.”

The listing of a property in the National Register places no obligation or restriction on a private owner using private resources to maintain or alter the property.

The National Register of Historic Places is the nation’s official list of buildings, structures, objects, sites, and districts worthy of preservation for their significance in American history, architecture, archaeology, and culture. The National Register was established by the National Historic Preservation Act of 1966 to ensure that as a matter of public policy, properties significant in national, state, and local history are considered in the planning of federal undertakings, and to encourage historic preservation initiatives by state and local governments and the private sector. The Act authorized the establishment of a State Historic Preservation Office in each state and territory to help administer federal historic preservation programs.

In North Carolina, the State Historic Preservation Office is a unit of the North Carolina Department of Natural and Cultural Resources. The North Carolina National Register Advisory Committee, a board of professionals and citizens with expertise in history, architectural history, and archaeology, meets three times a year to advise the State Historic Preservation Officer on the eligibility of properties for the National Register and the adequacy of nominations.