Arrest made in January robbery

GATESVILLE – The Gates County Sheriff’s Office has made an arrest in an armed robbery that occurred here Jan. 5 in the parking lot of a Gatesville business. 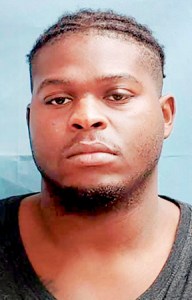 Makendrick A. Smith was arrested Jan. 26 and charged with armed robbery with a dangerous weapon. He was jailed under a $35,000 bond.

Smith’s arrest is a result of an investigation by the Gates County Sheriff’s Office that began following the Jan. 5 robbery. On that date, at around 5:15 p.m., a customer at the Dollar General, located on Main Street in Gatesville, was held at gunpoint inside their car. When the customer returned to their car after making a purchase, a male entered the passenger side and attempted to rob them at gunpoint. The customer’s car was located in front of the store’s front doors, and the suspect’s car was parked to the right of it.

After the suspect held the customer at gunpoint, he returned to his vehicle, described as a dark-colored Dodge Charger.