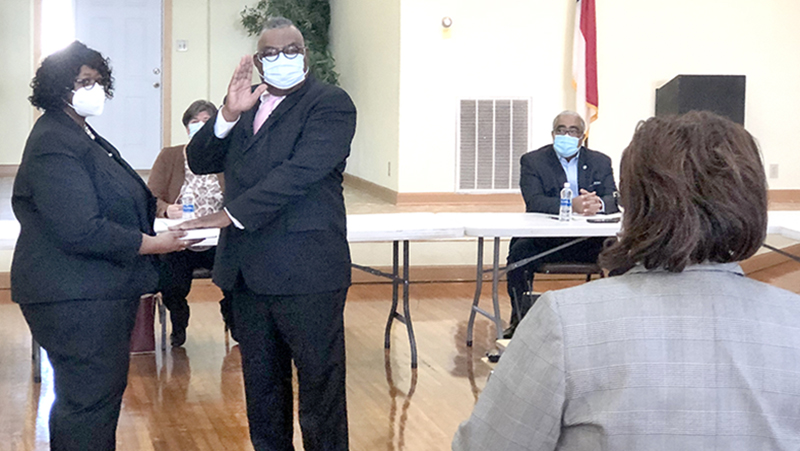 Ron Roberson was sworn in on Jan. 20 as the newest member of the Bertie County Board of Commissioners. His wife, Deloris, is shown holding the Bible while Bertie County Register of Deeds Annie Wilson (right, with back to the camera) administers the oath of office. Contributed Photo

WINDSOR – The Class of ’77 legacy continues within the Bertie County Board of Commissioners.

Last week, Ron Roberson accepted the oath of office as a member of the county’s leadership team. Roberson was the majority selection among the other four members of the board at a meeting held on Jan. 4. He is filling the two-year, unexpired term of former Bertie Commissioner Ernestine Byrd Bazemore who was elected as the District 3 State Senator in November.

“It’s unique that Ernestine and I are both 1977 graduates of Bertie High School,” said Roberson. “And to add to that legacy, our class also saw another member serve as a Bertie Commissioner, Stewart White. That’s kind’a neat, having three high school classmates who graduated together wind up serving as a county commissioner.”

For Roberson, Bertie County runs deep in his heritage.

“I was born here and I plan to die here unless the good Lord decides otherwise,” he stressed.

“God has blessed me and now I have this golden opportunity to serve citizens of Bertie County, helping them have a better way of life and to help the [county local government] departments in their efforts to provide needed services to those same citizens,” Roberson added.

For Roberson, it’s all about helping others. He was once a part of the Telamon Corporation, which, among other services, offered help to those struggling to find a job or needed to learn new skills in a fast-changing employment environment.

“I’ve helped folks who once worked in the fields gain jobs in factories, and after those job opportunities dwindled, I’ve helped people find the resources to re-tool themselves, re-train themselves for a workforce that’s now full of technology,” he noted. “It’s always been my passion to help others.”

Roberson has served in other ways, to include being a member of the Bertie Property Commission, on the Mid-East Commission’s Workforce Development Board, as a member of the Falcon Club, and a longtime volunteer with Bertie Relay for Life.

Upon his appointment to the Bertie County Board of Commissioners, Roberson had to resign his seat on the county’s Board of Elections, a position he held for the past three years.

Roberson is the owner of Ron R Properties, doing business as A-1 Unlimited Bail Bond Service for the past 20-plus years.

He and his wife of 41 years, Deloris, have two adult children and two grandchildren (ages 15 and 6)….the latter of which Roberson says, “are a blessing to me.”

“I want to help make my county a better place for them [grandchildren]. I want to see good jobs with good pay here in our county so my grandchildren and the children/grandchildren of our citizens won’t have to leave here to find jobs and raise their families elsewhere,” Roberson concluded.