Snow in the forecast tonight

A quick moving low pressure system is expected to bring a brief period of snow across southeastern Virginia and northeastern North Carolina tonight (Wednesday) and into early Thursday morning. 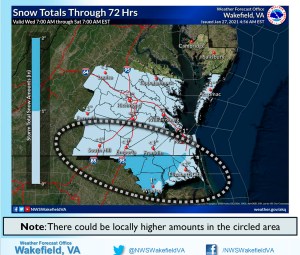 All four counties of the Roanoke-Chowan area were placed under a Winter Weather Advisory this morning by the National Weather Service Office in Wakefield, VA.

In their forecast, NWS-Wakefield meteorologists are predicting 1-to-2 inches of snow for Northampton, Hertford, Gates, and Bertie counties. There is a chance that some isolated areas will see snowfall amounts more than two inches.

Lighter accumulations (trace to 1”) are predicted for areas north and east of the Roanoke-Chowan area.

The storm is also expected to increase the wind speed. Gusts between 25-to-30 mph are expected in the Roanoke-Chowan area tonight and into early Thursday. Wind gusts of 35-to-45 mph are expected in areas near the immediate coast on Thursday, which could result in isolated tree damage/power outages.