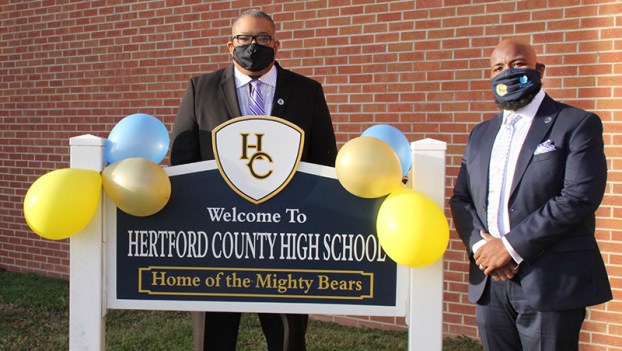 AHOSKIE – A former high school teacher/coach and all conference football player at the collegiate level has been named as the new principal here at Hertford County High School.

Dr. Jayson Leach, who began his duties at HCHS last month, replaces Ernest Cooley who was recently promoted to the county’s public school system Central Office as Director of Secondary Curriculum (for grades 6-12).

Leach, age 42, comes to HCHS from Harnett County where he was the principal of the STAR Academy, an alternative school. Prior to that he held assistant principal jobs in his native Cumberland County as well as in Alamance County.

“This gives me the opportunity to leverage my passion for education on a much larger scale,” Leach said of his new job at HCHS.

But why now….in the midst of a worldwide medical pandemic that has caused educators to seek alternative measures to offer instruction.

“The way I look at it there’s no better time than now,” Leach stressed. “When you’re looking at a pandemic, it can drive you to reach your goals or drive you to stay in a shell. I chose to reach out for higher aspirations.”

He added that the COVID-19 pandemic has changed how he handles what once was a normal daily routine.

“A lot of it now is trying to keep teachers calm and patient in what they have to do,” Leach noted. “We have to focus more and more on how to keep students engaged because there are so many outside factors that prevent them from doing what they need to be doing.”

With his background in sports as a player and a coach, Leach promised he would serve as an educational mentor to the student-athletes at HCHS.

“I’ve set high standards for all our students, to include our athletes,” he said. “I was an athlete, nobody lowered the bar for me because of that and that will not happen here at Hertford County High School.”

Hertford County Schools Superintendent Dr. William T. Wright Jr. said Leach working for Harnett County Public Schools – where Wright was once employed as a principal and later served as an assistant superintendent – was not a determining factor in his choice for the new top administrator at HCHS.

“He came to Harnett County after I left there in 2013,” Wright stated. “I didn’t know him, but with any candidate for an opening we have I’m going to see where they were and learn all I can about them while they were there.

“I contacted some folks I know in Harnett County and every single person I spoke with all said the same things….that Dr. Leach is a great guy, is great with kids, and has a strong work ethic,” Wright continued.

Even though Leach “nailed the interview [for the HCHS job]” per Dr. Wright’s words, there was still one hurdle to clear before the superintendent extended an offer for employement.

“What sealed it for me was when I went, unannounced, to STAR Academy in Lillington and saw him first-hand in that environment,” Wright said. “It was important to me to see how he works.

“The more I’ve gotten to know him since that time, I see him as a good fit for Hertford County High School,” Wright added. “I knew that replacing an administrator the caliber of Ernest Cooley, I had to have somebody that could pick up the ball and run with it. We have that person in Dr. Leach. We’re fortunate to have him and we look forward to him continuing to build on what was already started here.”

Growing up, Leach learned life’s lessons from two key vantage points as his father served as a Command Sgt. Major in the U.S. Army and his mother was a schoolteacher.

“My dad was gone a lot because of his service in the Army,” Leach recalled. “My mother had a passion for education; she made sure we were doing what we were supposed to be doing in school.”

Like Leach, two of his siblings chose a career in public education.

Now in his 18th year as an educator, Leach launched his career in 2002 as an Algebra I teacher and served as an assistant coach for football, wrestling and track at South View Senior High School in Hope Mills.

The following school year, he transferred to Gray’s Creek High School, also in Hope Mills, where he taught Social Studies and was the head coach for the wrestling program that won two consecutive conference championships. He was also an assistant football and track coach.

Leach then made a lateral move to Fayetteville’s Westover Senior High School where he carried the same instructional and coaching responsibilities.

“When I first became a teacher, my principal was Bob Barnes at South View High,” said Leach. “My students were a lot of the at-risk kids, those that are often hard to deal with. Bob did that for a reason; he saw my maturity at an early age and saw my potential. He told me that I would be a principal one day.”

Leach is a 1996 graduate of Fayetteville’s Seventy–First Senior High School where he was a varsity starter in football, wrestling, and track for three years. He received a full athletic/chancellor scholarship to Fayetteville State University where he earned All Conference honors in football as a freshman.

After two years at Fayetteville State, Leach transferred to North Carolina A & T University where he double majored in Physical Education and History.

He continued his educational growth, taking graduate level courses in History. In the Fall of 2006, Leach was admitted to the Masters of School Administration at UNC at Pembroke, completing the program two years later.

He also has completed post-graduate studies at Liberty University and Bread of Life Ministries, Inc., the latter founded by his parents – Dr. Jay R. Leach and Magdalene J. Leach.

Dr. Leach is a proud member of The Omega Psi Phi Fraternity, Inc.

JACKSON – “We’re not going to make this decision. It’s going to be a citizen decision.” That’s what Northampton County... read more