GATESVILLE – A local child will witness the aftermath of how the power of prayer works.

At 1:30 p.m. on Sunday (Jan. 17) in the parking lot of Central Middle School, a drive-thru parade will be held for Tre Mizelle, a 13-year-old who battled and overcame the ill effects of MIS-C, a condition that is possibly linked to COVID-19. 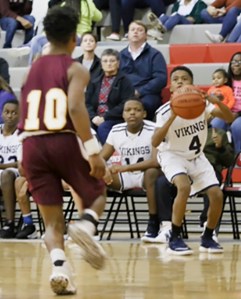 Tre Mizelle, aka “Sweet Feet”, is a standout athlete in basketball, football, and track at Central Middle School in Gates County. Contributed Photo

According to the Mayo Clinic, MIS-C is a serious condition that appears to be linked to coronavirus disease 2019 (COVID-19). Most children who become infected with the COVID-19 virus have only a mild illness. But in children who go on to develop MIS-C, some organs and tissues — such as the heart, lungs, blood vessels, kidneys, digestive system, brain, skin or eyes — become severely inflamed. Signs and symptoms depend on which areas of the body are affected.

Sunday’s event is being planned by Tre’s mother, Patrice Matthews-Faison. She said her son is scheduled to be released this week from the Children’s Hospital of the King’s Daughters (CHKD) in Norfolk, VA where he has been undergoing treatments since Jan. 6.

At the outset, Matthews-Faison said her son had a fever, a bad rash, no appetite, and was extremely weak. He later developed chills, vomiting and stomach pain.

“He had been previously tested for flu and for COVID, both of which were negative,” she said. “Tre wasn’t getting any better so I took him to CHKD. He tested positive for strep; his blood pressure was getting low, his vitals were off, and his fever kept getting higher.”

Matthews-Faison said the medical staff was on the verge of admitting him to ICU….but that’s before the power of prayer kicked in.

“I keep a few prayer warriors in my back pocket,” she noted. “I called them up and I knew God heard every prayer because 10-to-15 minutes later his vitals were normal; his blood pressure was stable, and his fever broke.

They got him stable enough that night to just admit him to the regular unit, not ICU.”

The following day, Tre’s antibody test came back showing he unknowingly had COVID-19 at some point.

“The doctors at CHKD said MIS-C is a post-COVID inflammatory issue that they have been treating a lot of children for lately. Basically, children are being exposed to COVID unknowingly and the symptoms are showing up weeks later,” Matthews-Faison said.

After all of the test results came back they showed Tre’s coronary artery, pancreas, and blood vessels were inflamed because of MIS-C.

“Once they started treatment for the inflammation, Tre’s condition drastically improved,” said his much relieved mother.

Matthews-Faison stressed that she wanted to go public with his story in an effort to raise awareness for other parents.

“For Tre, it started with a headache, fever, and body weakness,” she said. “With COVID, all we hear about is the effects in adults, but not much in children.

“I have absorbed everything every doctor and specialist has told me over the past few days so that I can help educate others. You, as parents, know your children better than anybody. You know when something isn’t right with them….don’t hesitate; get them to a doctor immediately, and lean heavily on the power of prayer,” she concluded.