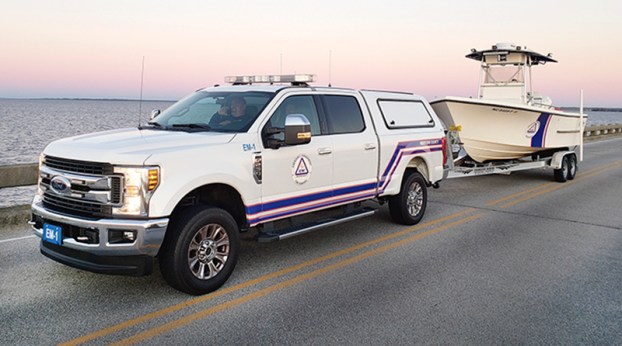 Chris Smith, the county’s Emergency Management Director, said the boat – a 2006 Parker Deep V – was put into service last month. He added that the boat was formerly used by the North Carolina Wildlife Resources Commission.

“Wildlife Officers Tim Wadsworth and Brad Stoop located and assisted us with the acquisition. It was acquired through NC surplus at the cost of $2,500,” said Smith.

A trailer for the boat was purchased new by the county. New electronics, lights and radios were also installed on the boat, bringing the county’s total investment at $10,978.

“No county funds were spent. All funds were used from Emergency Management Performance Grant funding,” Smith noted. It is intended to be used to assist in rescue, search and recovery missions.”

Smith said a larger boat was needed due to the number of missions Hertford County EM runs with sonar in larger bodies of water. The county houses a $45,000 sonar unit that was purchased with Homeland Security funds through NCEM in 2013.

He noted that since the 2013 acquisition of the sonar, Hertford County marine units have responded to 61 incidents, locating 30 targets where it required searching and locating the object with sonar.

“These are mostly persons located, but some were cars and/or vessels,” Smith shared. “Hertford County has responded to 14 different counties as mutual aid in the eastern region of the state to assist in other county searches since 2013.”

Smith said there are only six sonar units on the eastern side of the state. They are located in Hertford, Beaufort, Craven, Bladen, and Cumberland counties along with a unit at Atlantic Beach.

“Sonar use and the location of missing people brings closure to families who may have lost a loved one by drowning, a crime, or an accident on the water,” Smith said.

Along with its newest vessel, Hertford County Emergency Management also has a 19-foot Skiff and a 16-foot John boat that are used in different bodies of waters such as calmer rivers or ponds and lakes.

JACKSON – Even though there isn’t enough money in the county’s nonprofit fund for a whole new fire department building,... read more