GATESVILLE – The Gates County Sheriff’s Office is asking the public to assist them in identifying an individual wanted for an attempted armed robbery. 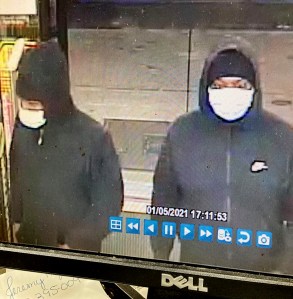 The two black males pictured here in this store surveillance photo checked out behind the customer and then were seen getting into the same vehicle as the robbery suspect. Contributed Photo

The crime reportedly took place at around 5:15 p.m. on Tuesday, Jan. 5. At that time, an individual, who had just made a purchase and exited the Dollar General located on Main Street in Gatesville, was held at gunpoint inside their car prior to leaving the store’s parking lot.

Gates County Sheriff’s officials said the victim reported that a Black male entered the passenger side of their vehicle and attempted to rob them at gunpoint.

The customer’s car was located in front of the store’s main entrance and the suspect’s car was parked to the right of it.

After the suspect held the customer at gunpoint, he returned to his vehicle described as a dark-colored Dodge Charger.

Please contact the Gates County Sheriff’s Office at (252) 357-0247, if you have any information regarding this attempted robbery.