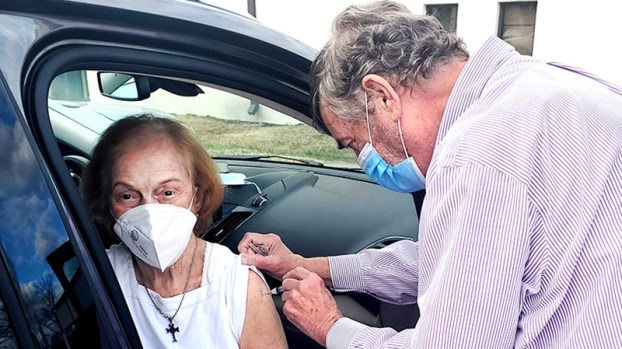 Roll up your sleeves!

“Just bear with us. The phone is ringing continuously,” said Director Andy Smith in an interview with the News Herald on Wednesday.

Like other health departments across the state and nation, Northampton County is currently working to distribute vaccines developed to protect people from the virus which has taken its toll on the community since March of last year.

Smith reported they are distributing the Moderna vaccine by appointment only. He explained there are 11 doses of the vaccine in one vial, and the appointment approach ensures that none of those doses go to waste.

“We felt this was the most reasonable approach to accommodate people, and we’ve had good feedback from individuals so far,” he explained.

But with limited supplies of the vaccine, which are received weekly from the state, Smith stated Northampton is following the distribution guidance from the North Carolina Department of Health and Human Services (NCDHHS) and the Centers for Disease Control (CDC) to vaccinate those with the highest risk first. If those guidelines change, he said they would adjust accordingly.

People in Group 1A, which includes healthcare providers and EMS workers who interact with COVID-19 patients, have already received their vaccinations, Smith reported. They’re now focused on Group 1B which includes the 75 and older population within the county.

Smith explained that COVID-19 has been the deadliest and most devastating in people older than 75 across the nation, and Northampton County’s Board of Health agreed to focus their efforts right now on getting vaccines to that population within the county.

For residents in that category, Smith said people simply need to call the health department at 252-534-5841 and leave a voicemail with their name and phone number to let them know they would like to receive the vaccine. They’ll then be added to the waiting list for an appointment.

Right now, Smith said they’ve got more than 160 names on the waiting list.

“We’re averaging a couple hundred calls a day,” Smith admitted. “You’re getting put on the list immediately when you leave your name and number. And we will call you the minute we have a dose ready.”

“I think it’s been a little bit overwhelming this week for a lot of us,” he said about the number of calls. “But we’re getting to people as quick as we can. We ask for a little patience.”

He said the health department staff is working hard to answer and return phone calls.

As for Northampton County residents who reside in long-term care facilities, Smith said their vaccinations were being handled through a federal government partnership with Walgreens and CVS. The health department is focusing on reaching residents who do not live in those facilities.

Healthcare and frontline essential workers are also included in Group 1B and will be prioritized next for vaccinations.

For people who aren’t sure which vaccination category they fall into, Smith urged them to check information on their Facebook page (“Northampton County Health Department”) or call the health department with questions. For individual concerns about the vaccine, Smith suggested talking with your healthcare provider who would know more about a person’s specific medical history.

“We have not seen any adverse reactions yet,” Smith said, adding that the most commonly reported side effect is a sore arm the next day.

“It is a tremendous amount of want out there for the vaccine, and it’s been a very pleasant surprise,” he continued.

While vaccines are continuing to be distributed, people are urged to continue practicing health and safety precautions to prevent the spread of COVID-19. Those precautions include wearing a mask, social distancing, and washing your hands.

As of January 8, Northampton County has had 1,223 total positive cases since the pandemic began. Of that total, 1,059 people have recovered while 59 have died. There are currently 105 active cases in the county.

LEWISTON-WOODVILLE – Dajour “DY” Keemer was just a few minutes away from his predetermined destination here on Dec. 31. With... read more