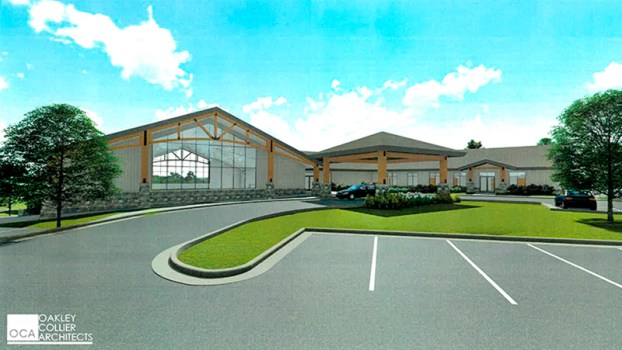 Shown here is the front-facing conceptual design of the Lake Gaston Community Center that is part of a four-year strategic plan envisioned by the Northampton County Board of Commissioners.

GASTON – The Lake Gaston project, which has been a topic of discussion for over a year, was the subject of a special called meeting of the Northampton County Commissioners here on Tuesday, Dec. 29.

“We want to make sure citizens would understand what we’re doing,” said Board Chair Charles Tyner as he opened up the meeting which was livestreamed on Facebook from the Lake Gaston Community Center. “We want to set an example of what we want to see take place in Northampton County. The pilot light is on, and we’re ready to move [forward].”

As previously reported by the News Herald, the commissioners approved the purchase of a six-acre parcel of land after a public hearing in Sept. 2019. The land, which sold at a cost of $50,000 per acre, is located at 625 Edwards Beach Road in Henrico. The commissioners also have an option to purchase another three-acre lot as well as a half-acre waterfront lot, but as of yet, no public hearing has been scheduled to pursue those purchases.

The land purchase is a part of the commissioners’ four-year strategic plan for the county. Specifically, they intend to use the land to build a conference center which will provide access to county-sponsored recreation and wellness programs to citizens in the western end of the county as well as house satellite offices for some county departments. Additionally, the center is intended to promote tourism in the area by providing public access to Lake Gaston.

“In Northampton County, Lake Gaston is the most underutilized resource we have,” said Franklin Williams, who serves as the county’s Economic Development Director, citing information he received from the NC Department of Commerce.

He said the project has the potential to bring in millions of dollars in tax revenue, though he did not provide any details on how those dollars would be generated.

A conceptual design for the building, provided by Oakley Collier Architects, was unveiled at the commissioners meeting on Dec. 7. Williams went over those designs again at Tuesday’s meeting.

“I think we have a beautiful design and that’s something our citizens can be proud of,” he stated.

The building will be two stories and include a multipurpose room (which can be rented out for events such as family reunions, weddings, and more), an exercise room, storage space, and offices for the recreation department, health department, sheriff’s office, and department of social services.

“You shouldn’t have to travel 45 minutes to take a flu shot,” Williams said of the benefits of increased health access, and also noted the satellite sheriff’s office can help cut down on response times in the western end of the county.

“We are searching out grants. There is grant money available,” Williams said, concluding his presentation.

He did not note the estimated cost of the building or how much grant funding they were seeking.

During the meeting, Tyner addressed several concerns the commissioners have received from citizens about the project and attempted to clear up any misunderstandings.

“This will not mean a tax increase,” Tyner emphasized. “This project will not mean a special tax for Lake Gaston or anyone else in the county. We’re in the business of reducing taxes.”

County Manager Charles Jackson also chimed in to explain that the county needs to focus on increasing sales tax revenue instead of relying on property tax revenue.

Tyner also addressed why that particular piece of property was selected to be the site of the proposed conference center. He explained that realtors looked at properties around Lake Gaston and the Edwards Beach property was the only one with enough space for what they wanted to do.

“We decided we would go to this property because of the size. It’s just an ideal piece of property,” he said.

He also noted that the commissioners were not in business with the Edwards family, the former owners of the land, and there was no conflict of interest. The family agreed to sell the property, Tyner said, because they wanted it to be open for public use.

As for the site itself, Tyner noted there was already a water line on the property and the county would have to install a septic system. He stressed that the building would not bring down the property value of surrounding properties.

Tyner also pointed out that Northampton was the only county bordering the lake that did not yet have a facility like this.

He concluded his comments by saying that “we can agree to disagree but everyone can still work together.”

The other commissioners spoke briefly in support of the project, and Michael Wray, who represents Northampton and Halifax counties in the NC House of Representatives, added his support as well. He agreed that the lake is a great asset for Northampton County.

The News Herald reached out to Northampton County officials after the meeting for more information about cost estimates, a projected timeline for construction, and other details about the project.

Williams responded by saying, “As of this moment, we cannot answer these questions because variables are constantly changing, and to give an estimation would not be feasible.”

GASTON – A Gaston man was arrested here on the day after Christmas after over one ounce of marijuana and... read more