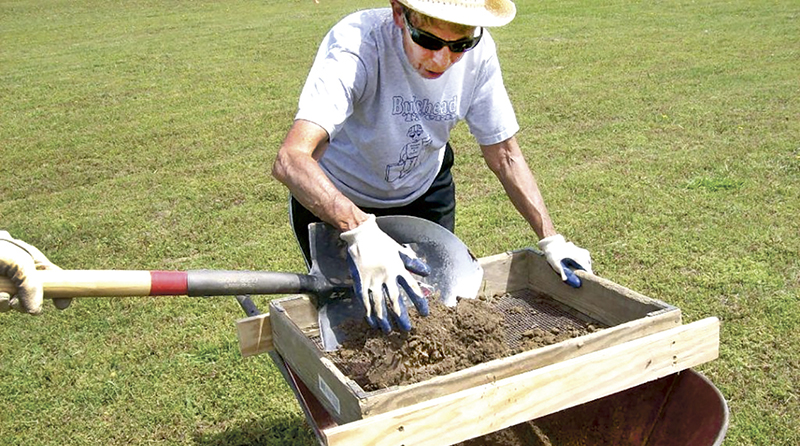 WINDSOR – Four hundred and thirty-five years after they vanished from Roanoke Island, there is growing evidence that the first wave of English settlers to our shores lived out their lives in what is now Bertie County.

That’s the opinion of officials with the First Colony Foundation, who after years of painstaking research and sifting through the sandy soil adjacent to the Albemarle Sound on its western bank along the Bertie shoreline presented their findings recently to the Bertie County Board of Commissioners.

Phil Evans, President of the First Colony Foundation, made the presentation along with his colleague, Nicholas Luccketti, an archaeologist and principal investigator. Their findings seem to solve what has become one of American history’s most enduring mysteries: what happened to the Lost Colony of 1585.

They were led this particular location – the Bal Gra property now owned by Bertie County as part of a broader outdoor recreational plan – thanks to a secret message on a centuries-old map. Hidden in invisible ink, presumably to guard information about the colonies from the Spanish, were the outlines of two forts, one 50 miles west of Roanoke Island, the same distance away that the colonists had told their leader John White they planned to move, according to his writings.

The First Colony Foundation’s team of archaeologists, led by Luccketti, initially investigated the site in in 2015. The possible settlement was close to a Native American village called Mettaquem. There was no sign of a fort, but just outside the village wall the archaeologists found two dozen shards of English pottery at what’s been dubbed Site X. Ground-penetrating radar revealed another possible dig site two miles away.

The search continued in December 2019 at what’s been dubbed Site Y, yielding many more fragments of ceramics from different parts of Europe. The fragments, which come from vessels used for food preparation and storage, suggest the presence of long-term residents.

Luccketti identified the ceramic shards as artifacts from either the late 16th century or early 17th century, adding that his findings were supported by the Jamestown Discovery Curator.

“They are the foremost experts in ceramics of this period,” Luccketti stressed.

Those findings led to more extensive archaeological work at Site X. Seventy-two, five-foot squares were excavated, each roughly 12 inches deep. Ground-penetrating radar was also used in that area, which located a sub-surface feature that was not linked to the Roanoke Colonists.

Site Y was located nearby. Luccketti said that area represents a smaller group of colonists, dispersed from Site X.

“We are confident, we are 100 percent sure that we have two sites that are related to the Roanoke Colonists,” Luccketti said.

Evans agreed. He cited a noted history professor regarding the significance of what was found along the shoreline in Bertie County.

However, Evans said Site Y does not completely solve the mystery of the Lost Colony.

He went on to say that even though it’s only partially excavated, Site Y creates a “more nuanced picture of Elizabethans along the Chowan River.”

Site X, he said, suggests a colony of refugees protected by Native American warriors, while those at Site Y were permitted to settle on designated land and provide for themselves.

“If so, other families may have been given sites for planting, hunting and fishing,” Evans added.

Now armed with that knowledge, Evans said he strongly believes that the colonists moving inland encountered “contact and cooperation [with the Native Americans]; not the old story of conflict and failure [on Roanoke Island].”

“These colonists settled where they intended by moving 50 miles inland, living among the Chowanoac people in scattered settlements on the goodly high land that [English explorer] Ralph Lane had seen on Chowan’s west bank,” Evans remarked.

Evans noted that he doesn’t see archaeological or historical evidence that the Roanoke Colonists moved to Hatteras Island, as others have suggested.

“The land there won’t sustain a population in a pre-industrial economy,” he said. “Here, Bertie County was supporting a population of fisher-farmers at that time. They lived off agriculture and the bounty of the rivers.

“By the time Ralph Lane explored inland and went up the river in the spring of 1586, the colonists had formed in their mind an intent to come and settle somewhere near where the Chowan River and the Roanoke River join,” Evans added.

Bertie County officials are ecstatic over the historical significance of what the archaeologists discovered on their property as well as eco-tourism development in the future.

“This is a game-changer as I see it,” said Bertie Commissioner Ron Wesson following the presentation. “What are our next steps? How can we leverage this in a positive way from a historical standpoint?”

Evans said discussions are ongoing to answer Wesson’s questions. He added that Site Y “still has much more to tell us” and more archaeological work there is needed.

“Whether we have the resources to do that, if those resources will be available to us, we don’t know that right now,” Evans stated.

Evans noted that while Site Y still holds some evidence, he stressed the need to also look at areas south of Salmon Creek.

“That’s an area where you don’t walk across a field and find ceramic,” Evans stressed. “That’s going to take a more labor-intensive approach. We have to plan for that.”

Wesson suggested leveraging resources from other partners, possibly including the state.