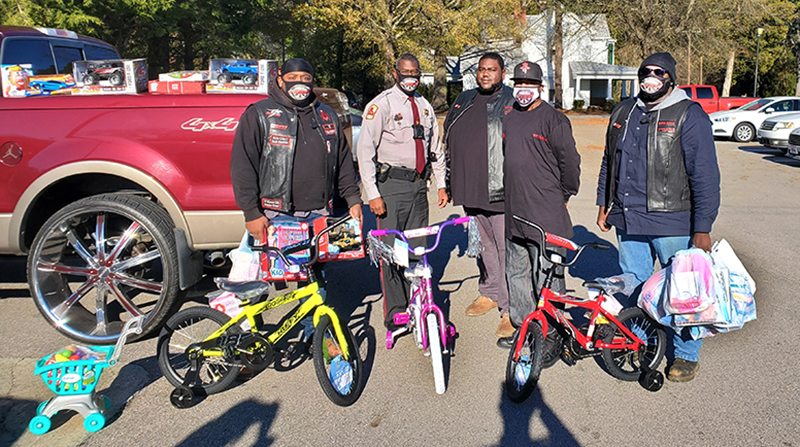 MURFREESBORO – Thanks to the generosity and holiday spirit of a Murfreesboro-based motorcycle club, local children of needy families will wake-up Christmas morning and discover that Santa didn’t forget them.

As part of their community-based outreach projects in 2020, members of the RPM Motorcycle Club used the proceeds from a November fundraiser to purchase hundreds of dollars worth of Christmas presents for children.

Fennell, a past president and now treasurer of the club, stated that the toy drive began in November.

“We sponsored a dinner, selling barbecued chicken plates on November 7 at Riverside Park in Murfreesboro to help raise money to purchase the gifts,” he said.

That fundraiser allowed club members to spend approximately $600 on toys, mostly bicycles, remote control cars, doll babies, and doll accessories, according to Fennell. He added that some toys were donated by private citizens.

“We had earlier met with Tiffany Walden, who works with DSS, to let her know of our plans to hold a toy drive,” Fennell noted. “They [DSS] decide which needy families will receive the toys and they will deliver them in time for Christmas.”

While there is a “rough-and-tumble” stigma typically attached to motorcycle clubs, Fennell said that isn’t the case for RPM as well as other such groups in the local area.

“We’re just average men who come from all walks of life and who just like to own and ride motorcycles,” said Fennell, a veteran law enforcement officer who holds the rank of Captain in the Hertford County Sheriff’s Office.

“It makes us feel good that we can help community; we had a lot of positive feedback on this,” he added. “We’re out here doing good things, to include helping to put smiles on the faces of local children on Christmas morning.”

The club has undertaken other projects this year. They sponsored a “Trunk-or-Treat” event for children on Halloween in the parking lot of Colonial Pharmacy in Murfreesboro, and also staged food giveaway to assist those impacted by a tornado on Aug. 4 as well as other needy families.