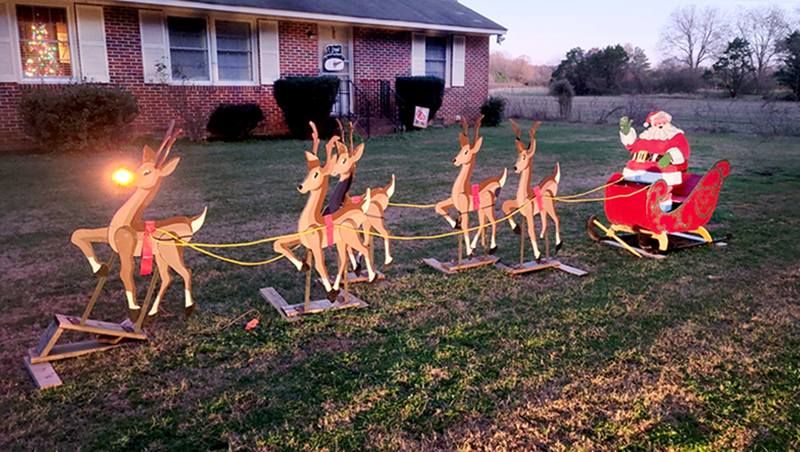 This hand-crafted creation by the now late Ernest Branch has stood the test of time for 66 years…from its debut in December of 1954 on Jackson Street in Rich Square (black & white photo shown within the story) until the present-day at his grandson’s home on Flea Hill Road in Hertford County (color photo). Contributed Photos

(Editor’s Note: With the exception of the opening paragraph, the following was written in 2014 by the daughter of the now late Ernest Branch, a well-respected rural mail carrier in Rich Square who in 1954 hand-crafted a reindeer-drawn sleigh, complete with Santa Claus. That creation is still displayed today by Mr. Branch’s grandson.)

RICH SQUARE – It may be only made of wood, held together by a handful of nails, and painted to reflect the appropriate colors befitting the subject matter, but its sentimental value is priceless.

This is a very important year (2014) for Daddy’s Santa Claus and reindeer as this is their 60th anniversary. It appeared in our front yard at my childhood home on Jackson Street in Rich Square until we moved to Pine Street where Santa started showing up on the roof at Christmas. His rooftop appearances lasted for years and years, but eventually the decision was made to keep Santa safely on the ground (or at least to keep Daddy off of the roof when he got older!).

The Christmas of 1996 after my brother, Steve, passed away was painful and Daddy did not have the emotional strength to display Santa and the reindeer, or so he thought. After we all reminded him of how many children would be disappointed, he rallied and brought Santa out a little later that year. 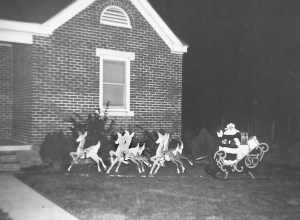 Since 1954, the only year Santa has not shown up at my Daddy’s house was December, 2013. We moved my parents to a nursing home in Raleigh on November 1, 2013. Kenny, Allen, and I could not find the strength my daddy had found and we chose not to display it, a decision I sadly regret.

For the past few years, however, Santa and the reindeer have found a new home with Steve’s son, Jon Branch – in a new town, in a new yard, at a new home where new children can now enjoy him. Steve is smiling in Heaven, I’m sure, at the thought of Jon carrying on this tradition.

For those of you who rode by Daddy’s house at Christmas to see Santa, or maybe carried your children by there, or maybe you yourself were taken there by your parents, or if Santa ever made you smile, or if he even made you believe again for just a few minutes, I have a favor to ask. Please take a moment and think of my Daddy this Christmas. My Daddy loved Christmas more than anyone I have ever known – it was a time for family, the church, joy, friendship, giving (not receiving), and everything you can put into a holiday.

When I reached that certain age and asked Daddy if there was a real Santa Claus, he answered without hesitation: “As long as you believe, Phyllis, Santa Claus will come every Christmas. I still believe and he’s never stopped coming here.”

This is the same man who repaired old toys every year, fixed bags of candy and fruit and then left all of those at the mailboxes (on his rural route as mail carrier) for those who might be having a hard time. Even if Daddy’s mind is not the same, even if his walk is slow and painful, or if he trembles too much to hold a Christmas present in his hands, I know that in his heart Santa still lives. And he waits somewhere for my Daddy at a special tree where there will be oranges, nuts, a pocketknife, brothers and a sister, and his parents, all filled with the wonders of Christmas.

And, because of my Daddy, I will always believe in Santa and the magic and joy he brings. If you can’t believe in magic, what is left?

My dad passed away in 2015 but Santa is still displayed at my nephew’s house near Ahoskie on Flea Hill Road.