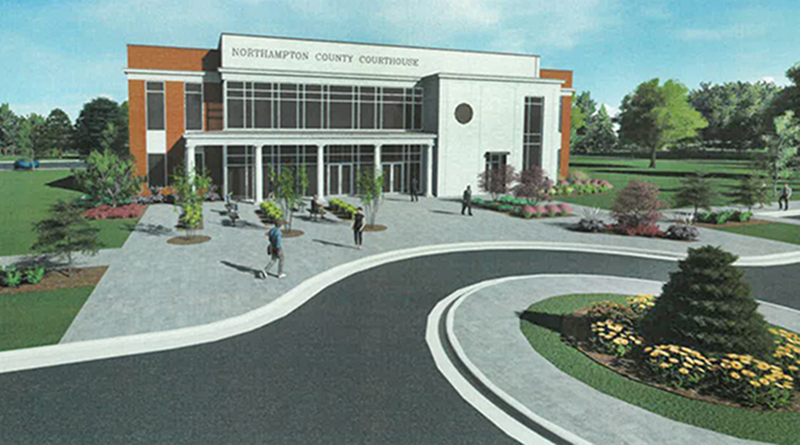 Shown here is the architectural concept of a new Northampton County Courthouse that is being discussed for possible construction in Jackson. Drawing by Oakley Collier Architects

JACKSON – More details about two different projects to benefit Northampton County were unveiled at the Board of Commissioners’ meeting here Dec. 7. One centered on a proposal to build a new courthouse, and the other continued the discussion about the Lake Gaston project which was approved over a year ago.

“I’m hoping tonight, citizens of our county, that you would be open enough to understand that Northampton County cannot continue to look the way it looks,” said Board Chair Charles Tyner at the beginning of the discussion on several economic development proposals. “We’re going to make sure that we move Northampton County. And citizens, we need your help in making sure that we move it to the next level.”

The first presentation was a preliminary proposal to build a new courthouse. Superior Court Judge Cy Grant and District Court Chief Judge Brenda Branch, who both serve in the judicial district which includes Northampton County, were invited to speak about why the new building would be necessary.

“The courthouse that we’re currently in is no longer functional and practical for our requirements,” stated Judge Grant.

He detailed structural problems that have caused issues with plumbing, mold, and bats over the years, but he emphasized that those were not the biggest problems.

“The primary concern that I have for our courthouse is security. To me, it’s a ticking time bomb,” Grant said, noting that the sheriff’s office does well, but the layout of the historic building makes it impossible to ensure safety.

In his 31 years as a superior court judge, Grant said he’s been to several courthouses in North Carolina. Many of them have needed upgrades to those old buildings.

“I can dare say most, if not all, of those counties have either engaged in massive renovations or have built new courthouse facilities. So what you’re proposing here in Northampton County is not something new. It’s being done all across the state,” Grant explained.

Grant said the designs for the new courthouse provided everything they would need to continue to hold court efficiently and safely.

“I think it’s exactly what we need in Northampton County,” he concluded.

Judge Branch expressed her gratitude to the commissioners for considering a new courthouse, acknowledging that the project will require a lot of money and work.

“We’ll use it as efficiently and effectively as we can,” she said.

“The conceptual design takes on a more modern approach,” he stated. “I believe it’s absolutely gorgeous.”

The design leaves room for potential expansion to house other local government offices as well.

Commissioner Geneva Faulkner asked if these designs would include alternative energy sources, and Architect Tim Oakley answered they may include solar panels.

County Attorney Scott McKellar noted that this was only the preliminary discussion for the project since no money has been committed yet, except for the cost of the conceptual designs.

Though discussions to decide on a proposed site are ongoing, McKellar confirmed that it will be located in the Town of Jackson.

Commissioner Kelvin Edwards motioned for Williams and the County Manager to continue exploring options for the courthouse project, and Commissioner Joyce Buffaloe seconded. The vote was unanimously in favor.

After the courthouse discussion, Williams also presented conceptual designs from the architects for the conference center project on Lake Gaston.

The Lake Gaston project, which is a part of the board’s four-year strategic plan for the county, was developed in order to take advantage of the natural resource of the lake as well as to give citizens in the western part of the county better access to opportunities.

“We want to operate this as we do the [Wellness] center in Jackson,” explained Tyner.

According to the floor plans designed by Oakley Collier Architects, the convention center building would not only have space for the public to utilize, but also contain offices for the county’s health department, social services department, and the sheriff’s office.

“The people in the west deserve to have some of the same opportunities we have down here in Jackson. It’s not fair for them to have to travel to here (Jackson) from the Warren County line to get a flu shot,” Tyner said, noting one example of a benefit to local residents.

“This will boost tourism. This will boost recreation. It will form at least 10 more jobs,” added Williams. “I think it’s Northampton County’s turn to earn the revenue this can generate.”

He estimated that development on the lake could bring in over $1 million in tourism. He also acknowledged that the architects from Oakley Collier have certification to ensure that the ecology of the lake isn’t disturbed by the addition of the conference center.

“These are two [projects] that will cost the county, but this is the one that will pay us back,” he concluded.

Commissioner Nicole Boone motioned for work on the Lake Gaston project to continue, and Edwards provided the second. Once again, the vote passed unanimously.

After purchasing the property last year, the Northampton County Board of Commissioners hope to build a Conference Center at Lake Gaston near Henrico. Pictured here is the architectural concept of that building. Drawing by Oakley Collier Architects