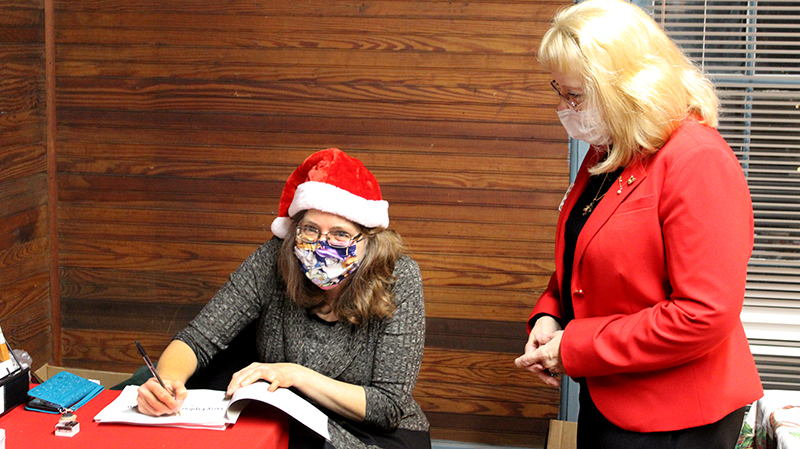 MURFREESBORO – A new children’s book takes readers on a journey across Murfreesboro… through the eyes of a loveable dog named Jazzy.

McGiboney found inspiration for her latest book from several trips over the years to Murfreesboro to visit her aunt, Carol Piper. After McGiboney released her “Jazzy Explores Smithfield” book, her friend Gertrude Revelle suggested she do a Murfreesboro-based one.

“At the time, I hadn’t thought about it, but the idea of visiting small towns in America took hold,” she explained. “When I told Gertrude I’d love to try it, she brought it up to the Murfreesboro Historical Association. It was a group effort and the book is wonderful because of so many great contributions.”

The book showcases Jazzy’s journey to visit several historic buildings throughout the town, including the Wheeler House, the Robert Vaughan House, the Rea Museum, and many more. They even visited the Meherrin Nation tribal grounds located just outside of town on Highway 11. And even though the Watermelon Festival was canceled this year, she and Jazzy were able to see some of the decorations used for the annual event.

“I think our favorite building was the Brady C. Jefcoat Museum,” McGiboney said. “If Jazzy could talk, I’m sure she would want me to make a statue of her just like the RCA Victor dog.”

The book is full of photos to detail Jazzy’s trip throughout the town. McGiboney takes all the photos herself, often using treats to get Jazzy to look in the right direction.

“Sometimes that backfires and she looks at me, waiting for me to say she can eat it,” McGiboney admitted. “Other times, she doesn’t listen at all and eats the treat before I get the camera up to my eyes.”

“Everyone loves the photos. It’s a lot of fun and Jazzy won’t ever complain about food,” she said of the experience.

In addition to the new Murfreesboro book, the other books in the Jazzy series explore different topics for children of all ages. For younger children, those topics include skills such as reading the ABC’s, counting backwards, telling time, looking for shapes, and learning colors. Jazzy books for slightly older children center on stories about friendship, retold fairy tales, and history.

The self-published author has plans for more Jazzy books in the future, focusing on more things that children would be interested in learning about. She’s also working on other books that don’t involve Jazzy.

Those who missed the book signing event last week have another opportunity to snag a signed copy of “Jazzy Explores Murfreesboro” from 10 a.m. to 3 p.m. on Friday, Dec. 18 at the Elizabeth S. Parker Memorial Library, located on Main Street in Murfreesboro. People can also purchase a book through the Murfreesboro Historical Association.

For more information about the book series, visit www.jazzysbooks.com