But yet the legacy of Northampton County’s Marshall Wood Grant in the success of the USDA Boll Weevil Eradication Program (BWEP) lives on….so much to the point where he is one of the three newest inductees into the prestigious North Carolina Agricultural Hall of Fame. 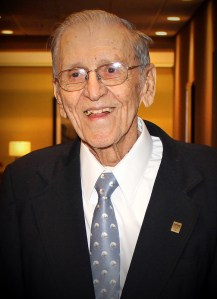 The late Marshall W. Grant has been selected for induction into the North Carolina Agricultural Hall of Fame. Contributed Photo

The late John Holman Cyrus of Raleigh and Fred N. Colvard of Jefferson will also be posthumously inducted, along with Grant, at a date to be determined due to the COVID-19 pandemic.

At a time when cotton producers were making 12 or more costly in-season control applications to manage boll weevil infestations, Grant – a lifelong farmer in the Garysburg/Gaston area of Northampton County – recognized the downward economic spiral in which cotton producers were trapped. He volunteered to spearhead the BWEP at its formation and trial in the mid 70s in northeastern North Carolina. He became its spokesman and lead proponent as it expanded throughout the cotton growing regions in the United States.

Grant was known far and wide for his impassioned and relentless determination to garner broad support for the BWEP, which eventually led to the eradication of the most destructive pest in the history of US cotton production. That led to the restoration of cotton’s economic viability for generations of farmers in North Carolina and across the Cotton Belt.

“The BWEP was historic in the timeline of our industry,” said David Parrish, CEO of the North Carolina Cotton Producers Association. “Mr. Grant’s vision and determination were instrumental in the program’s success throughout our state and across the Cotton Belt. He traveled the country galvanizing support behind the idea of a coordinated boll weevil eradication effort based on timely treatments and intensive trapping across broad acreage. Over time, the pilot program that began in North Carolina expanded across the Cotton Belt resulting in reduced input costs, improved yields and a revitalized industry.”

Because of the BWEP’s success, insecticide applications have been reduced in cotton by 75 percent, yield losses from insects were reduced by 50 percent, and it allowed Integrated Pest Management to become a standard pest control practice for many cotton production operations.

“The program set the US cotton industry on a direct path toward decades of improved profitability and environmental sustainability,” stated Dr. Kater Hake, vice president, Agricultural and Environmental Research, Cotton Incorporated. “It also demonstrated the power of unity to the producer segment. That unity is allowing growers to continue reducing their farm’s environmental footprint moving forward.”

One of Grant’s lifelong friends, North Carolina farmer, industry leader and former chairman of the NC Boll Weevil Eradication Foundation, David Burns, worked closely with Grant in those early years to convince farmers of the positive impacts the program would have on their operations and the future of US cotton production in general.

“My efforts were small compared to Marshall’s,” Burns noted. “The respect he earned and friendships he maintained with then NC Commissioner of Agriculture Jim Graham and then Senator Jesse Helms helped secure funding used to establish the foundation in our state. It was one of the first foundations established and served as a model for other state foundations.

“I could not be more proud for the Grant family and the memory of Marshall. This honor is most-deserved and one that rightly solidifies his place in the history of North Carolina agriculture,” Burns added.

Grant was President of the NC Cotton Producers Association, a State Director on the National Cotton Council, and on boards, commissions and committees too numerous to name. He served 10 years as Vice President of the North Carolina Farm Bureau before resigning and then serving 20 years as Chairman of the State Farm Service Agency Committee.

Grant’s legacy will forever be his tireless determination as a central figure and driving force behind the effort to gain producer support for the BWEP across the Southeast – which was critical to its eventual passage, funding and implementation. It is heralded as one of the most successful USDA-backed programs ever implemented.

To be considered for induction into the NC Agricultural Hall of Fame, a person must have performed an outstanding accomplishment where the cause of agriculture benefited greatly, or which led to a significant movement in agricultural progress.

“Mr. Grant’s work in the area of boll weevil eradication more than meets these criteria,” Parrish stated. “Every cotton producer in our state owes him a debt of eternal gratitude. It was an honor to nominate him for this award on behalf of all North Carolina cotton producers.”

The other inductees also met the criteria for induction.

Colvard was a progressive and entrepreneurial farmer who helped develop crops suited to the North Carolina mountain areas. He was one of the first to commit 40 to 50 acres of land to growing Christmas trees in the area, ushering in a new crop on a commercial scale. He also was among the first to use irrigation in the area to ensure high quality crops.

Colvard was better known for developing the blight-resistant Sequoia potato, which is credited with ending a potato famine in Peru.

Cyrus was a pivotal figure with regards to the state’s tobacco industry, serving for 37 years with the N.C. Department of Agriculture in various capacities, including Tobacco Program Administrator.

During his tenure, tobacco was the state’s top commodity and top crop grown by thousands of farmers statewide. The industry’s influence stretched well beyond the farms and rural communities to larger cities where tobacco manufacturing and warehouses employed many workers and supported hospitals, universities and cultural programs.