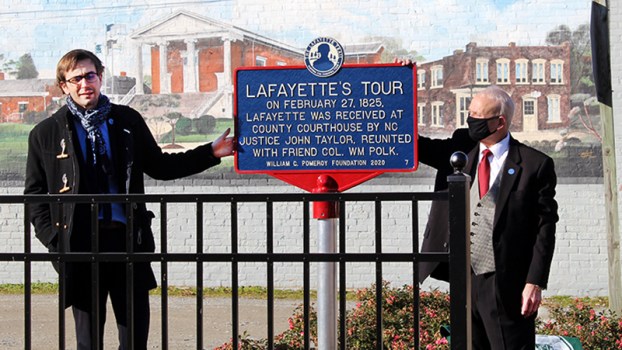 JACKSON – Plenty of people have passed through the town of Jackson over the years, but perhaps its most famous visitor was General Marquis de Lafayette. Now a new historic marker will commemorate his 1825 visit to the town.

The marker, which is located at Jackson’s small “pocket park” beside Futrell Pharmacy, was unveiled at a small ceremony on Tuesday, Dec. 8. It’s a part of the new “Lafayette Trail,” a project which recreates the route the general took when he toured the United States almost 200 years ago.

General Lafayette was a French native and one of the most famous generals of the Revolutionary War. At the time of his tour through the United States in 1824 and 1825, he was the last surviving major general from the war.

Details of Lafayette’s journey through Northampton County on Feb. 27, 1825 come from the journal of a Murfreesboro doctor named Thomas O’Dwyer. The doctor reported that Lafayette and his party first made a brief stop at Zion Church, located outside of Conway, before arriving in Jackson, then known simply as “Northampton Courthouse.” 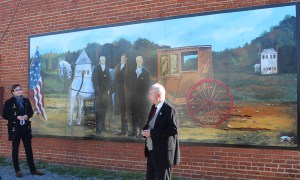 As part of the town’s connection to Marquis de Lafayette, a mural, painted on the side of the Embassy Café, features the Revolutionary War General along with a delegation that welcomed him to Jackson in February of 1825. Staff Photo by Holly Taylor

He was greeted at the courthouse by North Carolina’s official state delegation, including NC Supreme Court Chief Justice John L. Taylor and Colonel William Polk. Lafayette and his party then had a meal at the Calvert Tavern, located near the same place where the historic marker now stands today.

“I can’t tell you how pleased and honored we are to have this opportunity,” said Jackson Town Commissioner Jim Gossip at Tuesday’s ceremony.

Gossip mentioned several things the town is doing to recognize the historic trip in addition to the marker. The town board recently passed a resolution to name the small pocket park as “Lafayette Park,” and the Northampton County Museum is currently developing a permanent exhibit about the Revolutionary War general. There is also a mural, painted by local artist Napoleon Hill, featuring General Lafayette and the NC welcoming delegation. That is located across the street on the side of the Embassy Café.

“The town sees this as a significant tourism development opportunity that we hope will produce revenue for the town,” Gossip explained. “And it’s also a way to reinforce the strong bond that has always existed between the United States and France.”

The Lafayette Trail project was conceived and developed by Julien P. Icher, a French native who wanted to celebrate the relationship between the two countries.

“I’m so happy we are able to have this marker here to commemorate the visit of General Lafayette,” Icher said at the unveiling ceremony. “I think this is a magnificent spot here.”

The marker, which was paid for by a grant from the William G. Pomeroy Foundation, has a red border, a blue background, and white lettering. Icher noted this symbolized the colors of the flags from both countries.

Icher explained that the legacy of Lafayette’s tour across the United States was a message of national unity. At the time he was traveling in 1824 and 1825, the country was in the midst of a contentious presidential election between John Quincy Adams and Andrew Jackson. But Lafayette’s visit gave the country something to bring everyone together.

“As Lafayette traveled, he was the embodiment of the revolutionary spirit,” Icher said. “He was able to bridge those political divisions and remind Americans that we share something in common. That is, to me, his true legacy.”

In addition to the marker in Jackson, Northampton County also hosts another marker on Zion Church Road outside of Conway which visitors can see as they travel the Lafayette Trail route.

For more information about the project, visit thelafayettetrail.org

GARYSBURG – He was known as “Mr. Boll Weevil” – a nickname that carried him to state and national recognition... read more