EURE – Cecil Thomas Taylor, (affectionately known as “Seed Tick”), 100, of 020 Corner High Road, passed away on Monday, December 7, 2020. A Pearl Harbor Survivor, who served in the Army during World War II, it was fitting that he died on Pearl Harbor Day, a day President Franklin Roosevelt described as “a date which will live in infamy”. 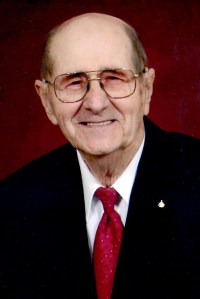 Born on September 8, 1920 in the Trap community of Bertie County, he was the son of the late Tom and Icie Newsome Taylor. He was also preceded in death by his grandson, Matthew “Matt” Taylor; son-in-law, Phillip Taylor; brother, Joe Taylor; and by sisters, Mary Newsome, Bessie Hudson, Ruth Dunning-White, and Eva Holloman.

Cecil was a proud patriotic soldier that served in the South Pacific Theatre during World War II. He was in Company A, 27th Infantry, that later became the 25th Infantry. He was so proud to be called a “Wolfhound”. At Guadalcanal, he fought in the battles of the Snake, Horse, and Kokumbona. He shared stories of the War with high school and college students, organizations, friends, and family. He was recognized and honored by so many. Gates County chose him to represent them by casting his hand and placing it in the Veterans Park at Fayetteville, NC. This year he was honored by Eureka Masonic Lodge in Elizabeth City, where he was made an honorary member of the National Sojourners 1776 Militia Chapter #560. Men from as far away as Hawaii came to pay tribute to him at this event.

A private service for the immediate family will be held in Cool Spring Baptist Church and will be conducted by his former pastors, Roger Kiker and Joe McKnight.

A graveside service, open to family and friends, will be held Thursday, December 10, 2020 at 2 p.m. in the Cool Spring Church Cemetery. Military and Masonic Rites will be accorded.

With restrictions associated with the Covid-19 Pandemic, no formal visitation will be held. However, friends may visit with the family at the residence. The funeral home will be open on Wednesday and on Thursday morning for those who wish to see and pay their respects to Mr. Taylor.

Memorial contributions may be made to Cool Spring Baptist Church, in care of Merwin Bauerle, 460 US 13 South, Eure, NC 27935.