When the Gates County Lions Club named Lulu Eure Grand Marshal for the 2020 Christmas Parade, they were selecting one who is recognized throughout the region and the state for excellence in her field and for numerous accomplishments throughout her career, but most of all because of her dedication to the people of Gates County.

And when the North Carolina High School Athletic Association celebrated its 100th Anniversary, the first list of its “100 To Remember” series “highlighted one hundred of the top administrators in NCHSAA history” and it was no surprise that Lulu Eure was on the list. 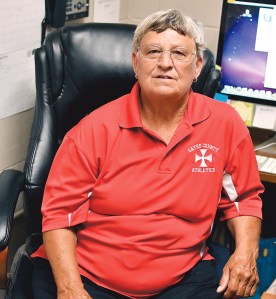 Lulu Eure has served for many years as the Director at the Gates County Community Center. Photo by Jim Green / Eastern Living Magazine

This prestigious list covered 100 years and all 100 North Carolina counties. Included were “athletic directors, principals, superintendents and others involved with the administration of athletics at a local or state level”.

NCHSAA Commissioner, Davis Whitfield, stated, “This group of distinguished individuals not only served their schools, school systems and communities in an exceptional fashion, but our Association as well.”

Eure is a graduate of Gates County High School and a Gates County native. Elton Winslow, retired GCHS principal, teacher, and coach, first worked with Eure as her basketball coach. The former coach said, “Lulu was an outstanding athlete with an exceptional work ethic, and made a rookie coach look good as the team went 23-4 for the season.” Winslow added, “No one person has touched more lives in our county, from providing athletics and recreation for our youth, fitness opportunities for adults, and meals and support for senior citizens.”

Taking her basketball talent to North Carolina State, Eure was part of the first club team and the following year, part of the first intercollegiate team in the N.C. State’s women’s basketball program. The point guard standout still ranks high in the N.C. State record books where she led the team in free throw percentage, assists and steals. Lulu also played on the N.C. State Softball Team and was one of a very small number of athletes to receive a scholarship in two sports. She had the honor of playing for two legendary coaches in Kay Yow and Robert “Peanut” Doak.

Seeing opportunities in several other directions (some of her teammates went on to play professionally, coach at the college level and one teammate enjoyed years as a commentator with ESPN), Eure never wavered in her plans to return to Gates County. She first devoted time to training race horses, and to farming, which continues to be a life- long love.

Doug Lilley, former Chairman of the Gates County Board of Education and President of the GCHS Athletic Booster Club for many years, told of how the county was very fortunate to have Eure come home and become Director of Recreation and then Director of the Community Center. Lilley said, “Lulu has a competitive desire to be the best, and through the Community Center and high school sports, she has tried to instill this in every child. She is truly dedicated to her profession.”

Eure coached GCHS softball teams several years, always making it to the play-offs and twice landing in the final four in the State. She has coached Cross Country, Volleyball and Soccer teams. She took a girls’ basketball team to the regional finals, and was even called on to fill in as coach for the boys’ basketball team one season in January. The boys respected “Miss Lulu” and they respected her knowledge of the game, and proceeded to make it to the 3rd Round of the state play-offs. And when the need arose, she was called to take on Athletic Director responsibilities at GCHS.

While being Director of the Community Center, Eure has worked to have as many programs as possible for the youth and for all citizens. There are senior citizens programs, the fitness center, the half-mile fitness trail, tennis courts, horse shoe area and the skate park. Much of this would not have been possible without the numerous grants Eure has been successful in writing and obtaining, such as those from Golden Leaf and The Parks and Recreation Trust Fund. These grants have helped with ball fields, additional tennis courts, the fitness trail and other items that have benefited the activities of both the community center and the high school. With the addition of the Cross Country Team and the re-establishment of the Track and Field Team, Eure has wanted to see GCHS have Wrestling and Golf Teams.

Among those who especially appreciate the good working relationship between the community center and the high school is Dr. Barry Williams, Superintendent of Gates County Schools, who commented, “Lulu Eure is a remarkable person who is dedicated to serving the students and adults of Gates County. She provides opportunities for everyone to participate in healthy activities at the community center and works diligently to meet the variety of interests of everyone. She gives of herself and her time to make a positive difference in the lives of our citizens. Ms. Eure is a genuinely kind and generous person and I truly enjoy working with her.”

Dr. Williams also relayed that Eure “goes above and beyond by supporting the Wounded Warriors program.” The Wounded Warriors Turkey Hunt involves a three-day stay at the community center for twenty warriors, and in addition to accommodations, provides food, guides and hunting locations for the heroes.

Ray Freeman, Chairman of the Gates County Commissioners, echoed appreciation of Eure’s efforts for the Wounded Warriors which he has worked with for some time. Freeman is a also a member of the Trillium Board of Directors and said Eure was “instrumental in working with Trillium to have the new playground equipment installed at the center that includes special safety designs for children with disabilities.”

Freeman also recalled fond memories of seeing Eure play basketball at N.C. State when he attended games while serving as a body guard for North Carolina governors. He stated he was proud of her then and continues to be now, knowing all she does for the county.

Many Gates County folks, now adults, fondly remember their summertime experience with Eure at Camp Wannagoma. And there were the dozen or so years that Eure served as director for Swamp Fest, the gathering enjoyed not only by citizens across the county but by many former residents who enjoyed coming home for the festivities.

With all her efforts for youth, none is more important to Eure than her 15 years on the Juvenile Crime Prevention Council, having served as chair and vice-chair. The mission of the Council is to develop and fund programs to keep youth out of the court system.

Though the Gates County Lions are proud of all of Lulu Eure’s accomplishments and accolades, they appreciate most specifically her simple and untiring devotion to the people of Gates County. From the pre-schoolers to the elderly, Eure is still having a positive impact on so many. Whether through sports teams or other health and fitness influence, her support for what is good for Gates County is unending.

Gates County Board of Education Chairman Ray Felton commented on his observation over the years, “Lulu has done a very good job taking care of the community center. It is not an easy job trying to make things happen, especially when some think they have a better way and hit the internet to complain when they have failed to play by the rules. Lulu is good, dedicated, fair and deserves every bit of appreciation we can give her.”

Whenever mentioning anything to Eure about what she’s been able to accomplish, she has always quickly directed all the credit to the people who have worked with her at the center, saying she was fortunate to work with people who were so good at what they do and who work so well with young people. Two co-workers have worked with Eure for decades. Robert Dilday has coached teams, officiated games, and maintained and marked fields along with many other duties. Guy Holley, who works part-time with the center, has coached and officiated, and also coached some of the high school teams with Eure.

Though respected and recognized far and wide, perhaps the most special recognition of untiring effort comes from the hundreds and hundreds, some now well along in age, who realize the positive influence Eure had on them. And they are quick to express their appreciation for what “Miss Lulu” meant to them.

Even though the Gates County Lions Club’s 2020 Christmas Parade is canceled due to COVID-19, their choice of this year’s Grand Marshal stands as a testament to Eure’s love of her home county and its citizens.