That’s how Gates County High School senior volleyball player Hannah Ward described her visit to the campus of William Peace University in the state’s capital city where she will begin her freshman year playing for the Pacers.

“Raleigh seemed a little overwhelming at first, but when I got to Peace it was kind of like Gates County,” the three-sport Red Barons player described. “It was very small and tucked away, but you could still go out an experience the city.” 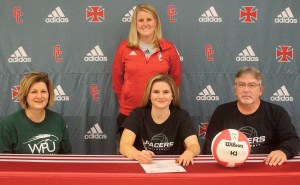 Ward, who also played basketball and softball, will graduate from high school in December. That will allow her to get in some portion of her senior year of playing time after fall prep sports were delayed due to the pandemic.

The ‘Barons opened their season with non-league home-and-home match-ups against Pasquotank and North Edgecombe before the start of Albemarle 1A Conference play at Manteo in December.

Ward will participate in all but the final two GCHS matches, but on the brighter side, thanks to her early enrollment, she will be able to suit up right away in college because Peace’s volleyball season – also delayed by COVID-19 – won’t begin until the Spring.

Peace was one of two schools that recruited Ward, the other being fellow NCAA Division III Hollins University in Roanoke, VA. She admits her instant connection with Pacers coach Nicole Barringer helped seal the deal.

“She was very friendly, the team was very welcoming, and that was fun,” she noted.

It also helped to have one of her former travel club teammates, Landis Limon, formerly of First Flight High School, already on the Peace team.

“(She) and I both played for Albemarle Regional Volleyball Club in Elizabeth City,” Ward said. “That’s a team I’ve played with since I was in fifth-grade.”

Ward credits her parents, Kenny and Tammi Ward, with being the greatest influence and inspiration in her life.

“They never only told me I was a good athlete,” she declares. “It was always what I did was good, but there were more things that I could work on. That humbled me and was a very good choice for them.”

Business Analytics is what Ward plans to study at Peace, with an emphasis on Accounting and Financial Analysis. And, while that sounds ‘heady’, she says she’d like to return to work in Gates County once her college career ends.

“I’d really like to be an example for the athletes who are here in Gates County,” she maintains. “I think a lot of athletes from here go away and don’t get a chance to experience college athletics because it might be difficult and they don’t stick with it. So, I’d like to take some of that persistence on to college.”

Ward says she’s ready for the next phase of her life, both as an athlete and a college student.

“I think I’m ready to move on, with December graduation and all,” Ward said. “I’ll miss two of my high school games, but when I go (to college) in January things will be starting.”

Ward hasn’t set elaborate goals for her early collegiate years. She just wants – most of all – to be a really good teammate.

“I hope to bring consistency,” she acknowledged. “I want to just always be a dependable player that can be counted on in tough situations.”

Coach Barringer has made Ward no promises of playing time for her incoming group. While she will get some quality time thanks to her head start, she feels if the fall schedule ever returns it’ll mean earning a spot all over again.

“I’d like to play right away, but I’ll have to earn it. I won’t be the only one starting in the Spring; and there will be three (newcomers) on the team in the fall,” she stated.

“A decade from now I’d like to have a steady career and making a difference in the community,” Ward said. “I want to set an example of an athlete who’s strong enough to go on to the next level and be inspiring. I want to be a successful athlete – and an even better person.”

Where is China hiding their submarines?

As a newspaper editor, I lay awake some nights thinking about headlines. No, I do not write headlines while in... read more