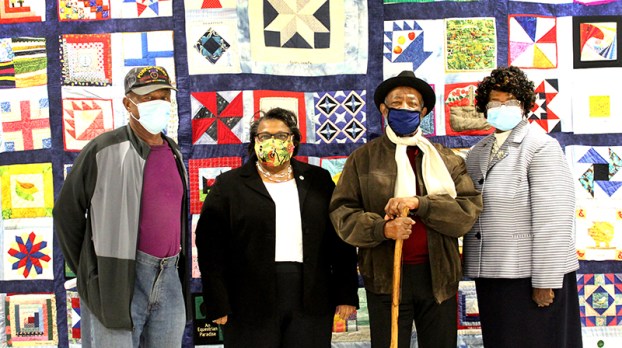 JACKSON – Quilts are often a symbol of connections because they’re made of several smaller pieces connected together by stitches to create one piece of art.

The Northampton County Cultural and Wellness Center is currently host to a special quilt that connects pieces of North Carolina’s 100 counties together. The colorful quilt, which is 16 feet wide and 8 and ½ feet tall, will be on display in Jackson through November, and possibly during December as well.

The project was conceived by Joy Javits, a program director at UNC Medical Center, and it was first presented at the 2001 opening of the NC Women’s and Children’s Hospitals in Chapel Hill. Javits’ idea was to create something that would reflect the patients who would benefit from the hospitals. She worked with 125 quilters who contributed blocks for the quilt, each representing a county in North Carolina.

The quilt squares consist of a variety of colorful patterns and designs. Northampton’s block was made by Joyce Suiter from Garysburg.

The 100 County Quilt is regularly transported to different parts of the state for display, and it came to Northampton County through the county’s Chamber of Commerce with Chamber Director Judy Collier making the reservation a year ago.

“I am very proud that Northampton County is going to be the custodian of this quilt through the month of November and possibly December. I encourage other counties to please come and look at it,” Collier said.

Collier learned about the quilt by a suggestion from Northampton County Commissioner Joyce Buffaloe, who is a part of the county’s Veterans Advocacy Commission. The group supports local veterans and plans events to honor them. Buffaloe wanted the quilt to be on display for their Veterans Day Banquet, though the COVID-19 pandemic forced them to cancel the event this year.

The quilt, however, can still be viewed at the Wellness Center, located at 9536 NC Hwy 305, Jackson during regular hours.

“It’s a conversation piece,” Buffaloe explained. “I just thought it needed to be seen by our citizens here in Northampton County.”

The quilt, through its hospital connection, also has a connection to veterans who served in North Carolina. According to information provided from the quiltmakers, during World War II, North Carolina had the highest number of men rejected from serving in the military due to health reasons. At the time, the state’s number of doctors and hospitals ranked near the bottom. These statistics later helped show the need for a state hospital in North Carolina to provide better healthcare to its citizens.

Because of that connection, Buffaloe said she thought it would be a good idea to bring the quilt to the county for veterans and others to enjoy. The cause is near to her heart since her husband was a veteran along with three of her brothers.

She helped to form the Veterans Advocacy Commission in 2019 to make it easier for veterans to share resources and support with one another. The small group is comprised of local veterans, all of whom served in Vietnam, and others who have family members who served.

“We have 1,435 veterans in this county,” said member Robert Wilkins, a retired Army veteran. “Our objective is awareness of what’s out there for them. A lot of them aren’t even aware of what they’re entitled to.”

Rev. Dr. Marjorie Edwards, another member of the group as well as Vice Chair of Northampton County’s Board of Education, has been taking care of her brother who was drafted in 1968 and returned from Vietnam with a number of mental health issues. She said it’s been a difficult fight finding records and filling out paperwork to make sure he could get benefits and the proper care he needs.

“It’s not fair how they treat these veterans,” she said. “When they come back, they shouldn’t have to worry about nothing.”

“You have to be a heavy advocate,” she continued. “Because if you don’t advocate for them, nobody else will.”

Buffaloe said they will continue to reach out and connect to all of the veterans living in Northampton County to ensure that no one gets left behind; binding them together just like the individual blocks of a quilt.

RALEIGH – Proceeds in excess of $13.5 million from a healthcare fraud case – that includes property in Ahoskie along... read more