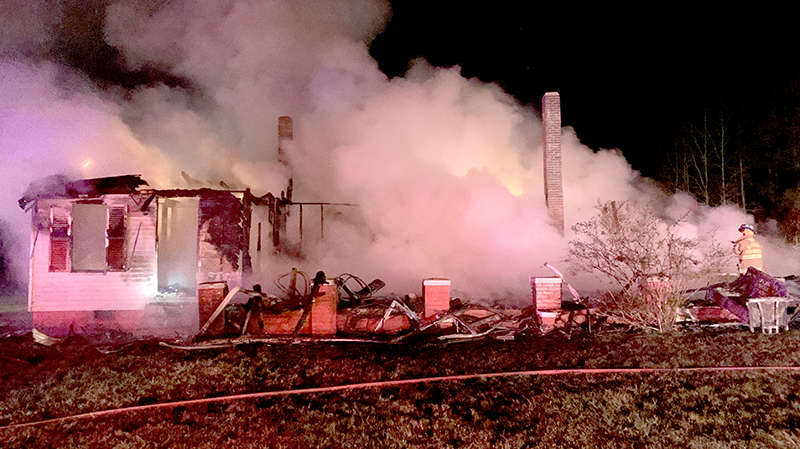 Shown here is a residence in the 1900 block of Big Johns Store Road that was destroyed Wednesday morning in a fire that is believed to be intentionally set. Photo courtesy of Gaston Fire-Rescue-EMS

There appears to be an arsonist at work in Northampton County.

The Northampton County Sheriff’s Office, the North Carolina SBI and the Office of the State Fire Marshal are currently investigating three arson cases involving structure fires that occurred in the pre-dawn hours of Wednesday, Nov. 18.

Northampton Sheriff’s deputies responded to the suspicious structure fires at three different locations during the period of 3:44 am to 4 am. 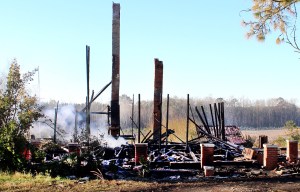 Smoke was still present Thursday morning from a Wednesday morning fire at an abandoned dwelling on Bynum Road near Seaboard. This is one of three cases of what is believed to be the work of an arsonist in Northampton County. Staff Photo by Holly Taylor

All three locations were in the Seaboard and Margarettsville areas of the county, of which one was confirmed as an abandoned home along Bynum Road.

“We’re still working on this; my investigators and the SBI and State Fire Marshal are still here today gathering clues that we hope leads to an arrest for the person or persons responsible,” Northampton Sheriff Jack Smith said on Thursday afternoon. “We will leave no stone unturned until we find out who did this and we encourage our citizens to call us if they can help us solve these cases.”

A press release sent Wednesday afternoon by Gaston Fire-Rescue-EMS identified another location in the 1900 block of Big Johns Store Road.

Gaston, Garysburg and Severn fire departments were dispatched just after 4 am to a residential fire at that location. No occupants were home at the time of the fire.

Upon arrival, the firefighters found the residence fully engulfed in flames with most of the roof collapsed.

Over 20 firefighters were at the scene and remained there for over three and a half hours conducting fire suppression and overhaul operations.

Meanwhile, multiple fire departments were on the scene of the other two fires.

“There are no reported injuries to any citizens at this time,” the Northampton County Sheriff’s Office said in a statement.

The NCSO is asking all citizens to remain vigilant of their homes, to immediately report any suspicious activities or individuals, and anyone with information pertaining to these structure fires to contact the Northampton County Sheriff’s Office at 252-534-2611, the NC State Bureau of Investigation, Northampton County Crime Stoppers at 252-534-1110, or call the 911 Center.