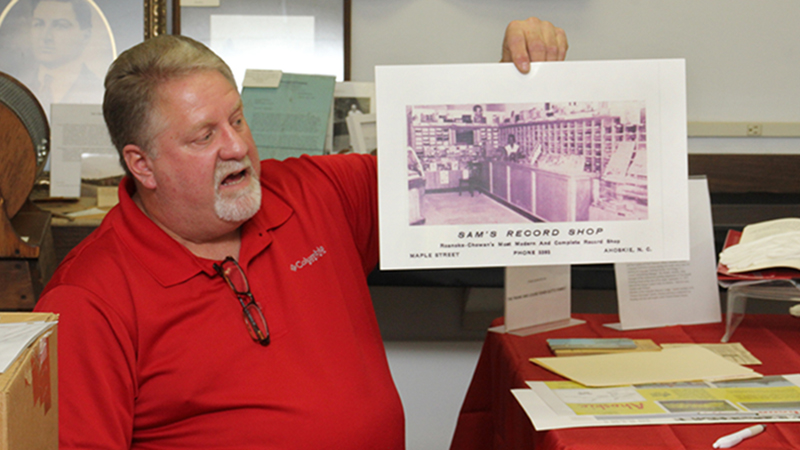 William “Will” Guttu shows an enlarged reproduction of a vintage poster advertising Sam’s Record Shop – a legendary former business in downtown Ahoskie. The poster was among a large number of items he donated from his late father’s (Frank Guttu) collection to the Ahoskie Museum. Staff Photo by Cal Bryant

AHOSKIE – They were in a foreign land, roughly 4,300 miles from home; secured behind barbed wire fencing and unable to understand the dialect of their captors.

But yet they were treated with human dignity, which led many to forge friendships that lasted a lifetime.

And the man in the middle of it all was Frank Guttu.

On Saturday afternoon, Will Guttu shared several intriguing stories of his late father, who first came to Ahoskie in the mid 1940’s as a German Language Interpreter at the Branch Prisoner of War Camp once located here. 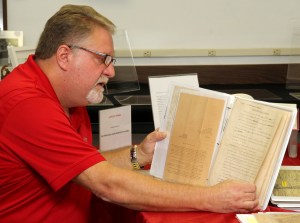 Will Guttu reads a contract from 1944 that allowed German POWs to work as paid laborers on a Bertie County farm. Staff Photo by Cal Bryant

While serving in that role, Frank Guttu – who as the son of Austrian/Hungarian immigrants spoke four different languages – maintained important documents detailing those times. Later during his professional career as the Advertising Director of The Ahoskie/Hertford County Herald, he stored away numerous files that helped tell the story of that era.

Many of those historic documents and clippings were donated on Dec. 14 to the Ahoskie Woman’s Club. Those artifacts will be added to the growing number of displays at the Ahoskie Museum, located inside the Regional Visitor’s Center on Main Street.

Among the donated treasures are thank-you letters sent by Germans to Ahoskie citizens who had befriended many of the POWs and sent care packages overseas after World War II had ended.

“My father translated those letters from German to English,” Will Guttu said. “These letters will hit you right in the heart as those Germans had lost everything….some didn’t even have a pair of shoes and the people of Ahoskie reached out and helped them.”

Will Guttu even donated a few of the original mailing envelopes, complete with vintage postage stamps that era.

Other donated documents are even more unique in nature. Because so many local young men were called to serve their country during World War II, that left a shortage of manpower on farms and in other important lines of work. To address that shortage, local farmers and businessmen hired the POWs as laborers.

“There were contracts between the POW camp and local men to provide that labor,” Guttu noted in his presentation, displaying one in particular that documented the hiring of 20 prisoners for three days in the fall of 1944 to stack peanuts in nearby Bertie County. “The POWs were paid $2.07 each per day, which came out to be 11 and one-half cents per stack for 18 stacks of peanuts.”

The artifacts also included several rosters of the staff and the POWs at the Ahoskie Camp, which housed as many as 225 prisoners as one of 18 such facilities across the state at that time.

“I remember my father telling me how well everyone got along,” Will Guttu recalled. “The prisoners were given passes to go to the movie theatres here in town. There was only one attempted escape in February of 1945, but that ended quickly in capture when they got to the Chowan River, the water was rough and were scared to cross.”

The bonds of friendship between the townspeople and the POWs was very evident through the story of Ferdinand Hain.

“He worked in the Orderly Room, the administrative area of the camp,” Will Guttu explained. “After the war, Dr. Hain, who later become the Deputy Director of the Austrian National Bank, began corresponding with my father. In the early 60’s, Dr. Hain would come to Washington, DC for monetary conferences and while in the States he would always come to Ahoskie for a quick visit. Later, my mom was invited to tour Austria and Dr. Hain and his wife gave her the royal treatment.”

He placed on loan to the museum a jewelry box, handcrafted by one of the POWs. The bottom of the box contains an inscription of a date (Jan. 23, 1945) and a name (August Rahman) given to Sgt. Frank Guttu, Ahoskie Branch POW Camp Interpreter. 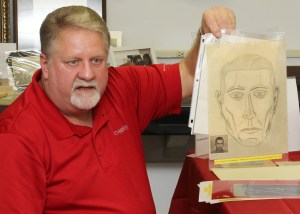 Frank Guttu’s wide range of talent included art. Here, Will Guttu holds a composite sketch, crafted by his father, of a suspect wanted in a 1958 bank robbery in downtown Ahoskie. Staff Photo by Cal Bryant

Additionally, Guttu loaned a handcrafted cigarette dispenser to the museum, which was made by one of the POWs and given to his father.

There were other items he left to display in the museum, including old newspaper advertisements, a promotional flyer produced by the Ahoskie Chamber of Commerce, a sales brochure from Shoup’s Boats, a vintage 1939 historical edition of The Herald, and a poster from the legendary Sam’s Record Shop, back when it was located on Maple Street.

“I’ve spent hours in that shop buying 45’s,” Will Guttu recalled. “What a special, special place in my heart.”

Even though he was born and raised in Cleveland, Ohio, the town of Ahoskie was a special place for Frank Gutu.

“My dad loved Ahoskie,” said his son, who is now living in Myrtle Beach, SC. “He was very active with the Chamber of Commerce, once serving as their president. Whatever he did, he did it right; never halfway.”

Frank Guttu also helped get Roanoke-Chowan Technical Institute (now a community college) up and running in the 1960’s. Among the artifacts donated by Will Guttu is a photo showing Earl Dilday, the first-ever RCTI graduate, with the school’s first president Jack Young and NC House Representative Roberts H. Jernigan Jr. of Ahoskie, chairman of the school’s Board of Trustees.

One of the first stained glass windows at Ahoskie’s St. Thomas Episcopal Church, where Frank Guttu taught adult classes, was installed in his memory following his sudden death in 1971 at the age of 48.

Frank Guttu was also an artist, a skill that was once used in a very unique manner.

“In 1958, there was a bank robbery here in Ahoskie and there was an eyewitness. My father was asked to do a composite sketch of the robber based on what the eyewitness saw,” said Will Guttu, holding up the original drawing. “The robber was caught and arrested and the FBI sent my dad a thank-you letter, complete with a photo of the robber.

“My dad saved everything; he was so organized, and one day I knew there would be a need for what he kept. Today is that day,” Guttu said as he closed the presentation.