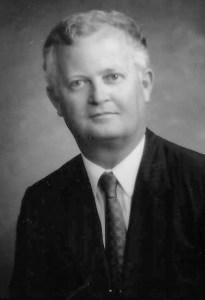 Dr. Newbern had two sisters, Betty Ham (Tom) and Donna Dunlow (Sidney) and a number of nieces and nephews. He leaves behind many friends and former co-workers who remember his honesty, wisdom, and superior leadership.

Dr. Newbern attended East Carolina University where he received a Bachelor of Science Degree and a Master of Arts Degree. He began his career as a math teacher and soon became principal at Bertie County Sr. High School at age 25. Newbern was then principal at Rocky Mount Senior High School. He earned a Doctorate in Education from Nova University. He was named Vice President at Vance Granville Community College and held that post until he became president at Halifax Community College in July of 1988. The Literary and Science Center at HCC bears the name of Dr. Newbern. In 2015, Dr. Newbern was inducted into the East Carolina University Education Hall of Fame.

Following his retirement in September 1998, Dr. Newbern, an avid outdoorsman, continued enriching his life through his favorite pastimes – farming, fishing, hunting, and traveling. He was a member at Trinity Episcopal Church in Scotland Neck and on the Vestry. He spent time enjoying his family – especially the grandchildren – at the farm, at the beach, and at their athletic and dance events.

A graveside service will be at Woodlawn Cemetery in Williamston, NC on Sunday, November 15 at 2 p.m.

Memorials may be made to Historic Episcopal Church of the Advent, 307 West Franklin Street, Enfield, NC 27823.

Letchworth-Sykes Funeral Service will be handling the arrangements for the Newbern family and online condolences may be directed to the family by visiting www.letchworthsykesfs.com.