Local residents and motorists are advised that flash flooding is occurring today.

A Flash Flood Warning is in effect until 12:15 pm today (Thursday) in the Roanoke-Chowan area, according to the National Weather Service.

A map from North Carolina Emergency Management shows 5.75 inches of rain has fallen over the past 36 hours (6:30 pm on Nov. 10 to 6:30 am today: Thursday) at Tri-County Airport (an official weather reporting station). More rain is expected today. 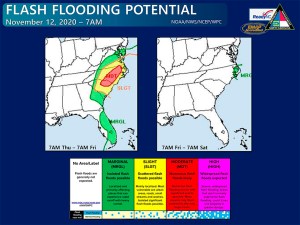 This morning features scattered showers and some heavy downpours across central and eastern NC, but the heaviest rain and greatest flooding threat this morning is along and near the I-77 corridor. The axis of heavy rain will slowly move into central and eastern NC during the late morning and afternoon hours. Widespread heavy rain will come to an end from northwest to southeast during the afternoon and evening hours, with scattered showers possible overnight and into Friday, primarily near the coast.

Flood and Flash Flood Watches remain in effect for much of the state, with numerous Flash Flood Warnings, Flood Warnings, and Flood Advisories also in effect. Please monitor your local NWS office and news media for the latest weather alerts. These rainfall amounts will also lead to widespread minor river flooding, with moderate river flooding currently forecast along portions of the Neuse, Tar, and Dan Rivers. River forecasts will continue to be refined depending where exactly the heaviest rain falls.

There is also the threat of isolated severe storms later today across the eastern third of the state. Localized damaging wind gusts will be the primary threat, but an isolated-brief tornado cannot be ruled out.

The frontal system that is bringing this heavy rain will move offshore around sunset, where it will stall and allow what remains of Tropical Storm Eta to move northeastward along it. The strongest gusts are expected to remain just offshore as Eta passes our coastline Friday morning.

Another tropical depression will likely develop in the Caribbean over the next couple days. This system still appears to be primarily a threat for Central America.