Mrs. Newsome was born in Gates County on April 27, 1937, and was the daughter of the late Timothy Beaurie Parker and Lillie Waff Smith Parker. A retired Registered Nurse, she had worked with her father-in-law, Dr. Plyler in his office in Whaleyville, Carteret General Hospital in Morehead City, and with Courtland Health Care in Courtland, VA. A lifelong Baptist, she was raised in the fellowship of Reynoldson Baptist Church, and later had been a member of South Quay Baptist Church, and Gatesville Baptist Church. 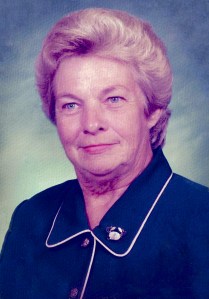 In addition to her parents, she was preceded in death by both her husbands, Marion Timothy Plyler, III and Gilbert James Newsome; a sister, Louise Neeble; and a brother, J.B. Parker.

A graveside funeral service will be held Tuesday, November 10 at 2:00 p.m. in the Gatesville Cemetery and will be conducted by the Rev. Tom Holland. Friends may visit with the family at the grave immediately following the service, or all other times at Deborah and David’s home, 474 Flat Branch Road, Gatesville.

In lieu of flowers, contributions may be made to Samaritan’s Purse, P.O. Box 3000, Boone, NC 28607 (online at www.samaritanspurse.org/donate); or to the Billy Graham Evangelistic Association, 1 Billy Graham Parkway, Charlotte, NC 28201 (online at www.billy.graham.org/Christian/Ministry); or to Community Home Care & Hospice, 200 Green Street, #203, Williamston, NC 27892.