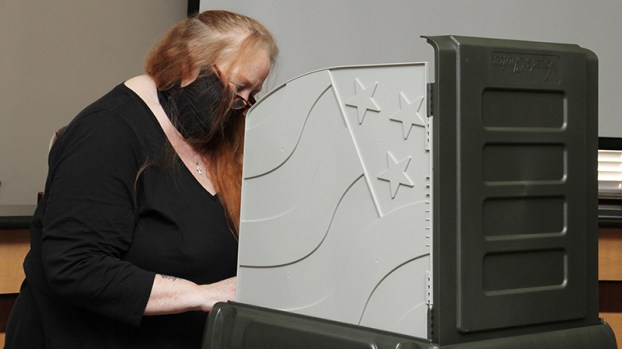 Cindy Watkins casts her ballot on Tuesday afternoon at the Ahoskie 2 precinct. Watkins was among a large turnout of over 10,600 Hertford County voters who participated in the General Election. Staff Photo by Cal Bryant

Hall and Hall emerge victorious in HC School Board race

By a wide margin, political newcomer Eddie Hall has earned a seat on the Hertford County Board of Education.

According to the unofficial results of Tuesday’s General Election, Hall topped a field of seven candidates with 4,622 votes.

There were two School Board seats open in this year’s election cycle. Placing second and taking that seat was longtime Board of Education member J. Wendell Hall. He was named on 3,595 ballots, according to the unofficial results.

Incumbent David Shields, the current chairman of the School Board, lost his bid for another four-year term. Shields finished third in the overall balloting with 3,180 votes.

Melanie Storey, the county’s incumbent Register of Deeds, was also unopposed in her reelection bid. She received 7,967 votes.

With 10,671 of the county’s registered voters casting ballots, turnout was at 71 percent in Hertford County.