RALEIGH – Col. Joseph (Joe) Mayon Parker, 89, a native of North Carolina and a resident of Raleigh, passed away on October 26, 2020. He was preceded in death by his wife, Lauretta Owen Dyer Parker, mother Mildred Poe Parker and father James Mayon Parker. Joe was born on October 11, 1931, in Washington, NC and lived in Windsor, NC until the age of 3. His family later moved to Ahoskie where he and Lauretta raised their family.

Joe graduated from Ahoskie High School in 1949. He attended Davidson College for 2 years and earned his undergraduate degree, and in 1992, a Master’s in Public Administration from the University of North Carolina at Chapel Hill. 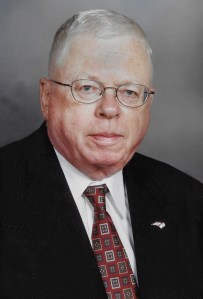 While in Ahoskie, Joe ran Parker Brothers, Inc., a Printing and Publishing Company, which published the Hertford County News-Herald, and the papers in several surrounding counties. Joe eventually acquired full control of the company which continued to grow under his leadership, at one point publishing as many as seven community newspapers in northeastern North Carolina and southeastern Virginia. For many years, he wrote a weekly column for the papers.

Joe worked tirelessly to promote economic growth in northeastern North Carolina serving on numerous local and state boards. As a member of the East Carolina University Board of Trustees he helped bring more and better health care to eastern North Carolina with the establishment of what is now the Brody School of Medicine.

Joe met his wife, in Pittsburgh, PA while he attended a printing management program at what is now Carnegie Mellon University. They were both members of the Roger Williams Fellowship, a Baptist student group. They especially enjoyed their many dates watching the Pirates play and dining on Italian food.

In 1993, Gov. Jim Hunt appointed Joe to head the Governor’s Highway Safety Program whereby Joe brought the “Click It or Ticket” and “Booze It and Lose It” programs as we all know them today to North Carolina, along with many other safety initiatives. In 2018 and 2019, he was honored with special awards for his work during his 8 years as the leader of the program.

Joe’s military career extended into a lengthy commitment to his country by serving two years in the U.S. Army in Fort Jackson, South Carolina. He then served in the National Guard for 31 years. During his career, he attended both the U.S. Army Command and General Staff College and the Army War College, and in the late 70s and early 80s he led the guard’s state public affairs division in Raleigh.

Joe was active throughout his life in the Democratic Party. He served on the party’s state executive committee, and in 1980 he was a delegate to the Democratic National Convention. His last act was to vote in the 2020 election. He gathered his remaining strength to loudly and proudly declare his votes for Democrats- local, state, and national.

For as long as his health allowed, he attended his weekly Rotary lunch meetings. He was proud to be recognized as a Paul Harris fellow and always looked forward to his weekly fellowship time with his fellow Rotarians. As time passed, going to Rotary became a highlight of his week. He could always deliver a “beautiful prayer” as part of the meetings.

Joe and Lauretta loved traveling and seeing the world and some of their trips included South Africa, Victoria Falls, Russia and Zambia. One of their favorite overseas trips was visiting Lauretta’s childhood WWII pen pal Enid Heath and her husband in England. Lauretta and Enid continued their letter writing for all of their lives. Some of Joe’s other greatest loves were Parker’s BBQ, the NC Symphony, NC Theatre, a good steak, and above all watching his beloved Tar Heels play.

There will be a graveside service at Historic Oakwood Cemetery on Wednesday, November 4, 2020 at 2 p.m.

In lieu of flowers, memorials may be made to Hayes Barton UMC Music Fund or Ahoskie United Methodist Church, 212 Church St., Ahoskie, NC 27910.

Funeral arrangements are by Brown-Wynne Funeral Home in Raleigh.