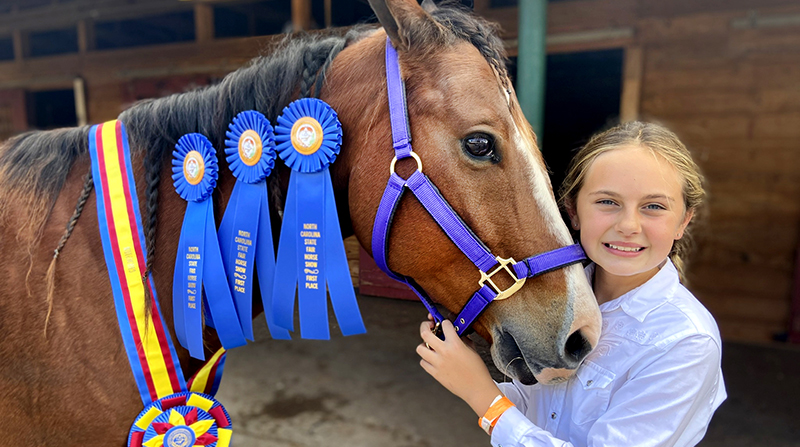 Kendall Harrell and “Sweetie” pose with the three blue ribbons and the Grand Champion award they captured in the gaming division of the North Carolina State Fair Horse Show held Oct. 23 in Raleigh. Contributed Photo

“We are very proud of what she accomplished at the State Fair Horse Show. All the practice time she put in paid off,” said her father.

However, her award-winning effort didn’t stop at the State Fair Show.

Jason Harrell explained that last week’s event was part of a two-show circuit, which counted towards a year-end championship. The first show of the circuit was in August at the Senator Bob Martin Agricultural Center in Williamston. There, Kendall was champion of her age division as well as champion of the gaming division for all ages.

With enough points accumulated from both shows, she won the Grand Champion award for the circuit. 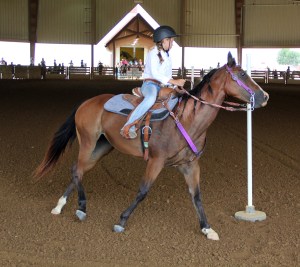 This photo shows Kendall Harrell and “Sweetie” in action during the pole bending competition held in August at an event in Williamston. There, Kendall was champion of her age division as well as champion of the gaming division for all ages. Photo by Julie Hurdle

Kendall competed in these shows on her 11-year-old quarter horse mare, “Ima Sweet Starlight” aka “Sweetie”. Her parents purchased “Sweetie” in February 2019.

Prior to that, Kendall rode and competed on “Cheyenne” – a now 22-year-old quarter horse (half linger cross breed).

Kendall, currently a 5th grader at Ridgecroft School, said she fell in love with riding horses at age 3.

“It started at my first dentist appointment where the hygienist promised me if I had a good check-up she would let me ride her horse,” Kendall recalled.

As to her reaction upon riding a horse for the first time, Kendall said, “I really liked it. I asked if I could come back again. I kept coming back and she [the dental hygienist] starting teaching me how to become a better rider. That’s when I wanted to have a horse of my own.”

As her riding skills progressed, Kendall began competing in English and Working Western horse shows throughout eastern North Carolina. In those events, the competitors are judged on correct riding styles while the horses are judged on their movements and commands from the rider.

“It was usually something going on all the time, traveling to and from those events,” noted Mr. Harrell. “Instead of a ball and bat or a tennis racket, Kendall chose to compete athletically on the back of a horse. We’ve really enjoyed that time together as a family.”

Over the past couple of years, Kendall has been focusing more of her training on the timed events, barrel racing and pole bending. Due to her young age, Mr. Harrell said the gait (speed) of the horse is slower.

“It’s more of a trot with her current age group,” he explained. “But that puts a lot of pressure on the rider to control the gait.”

Mr. Harrell added that upon reaching the age of 11, Kendall will move up a notch in competitions where horses are allowed to run faster during the timed events.

“We’ll shift our training focus at that point, pushing the horse to go harder and go faster,” he said.

Like the rest of the world, COVID-19 has had an impact on horse shows. Jason Harrell said a typical show season begins in March.

“It was the first or second week of June before we went to our first show this year; so, yes, COVID-19 really had a big impact on us,” he said.

“But yet we used that time to practice more at home,” Mr. Harrell continued. “We have a riding arena on our property and Kendall rides every day if she can because it keeps her focused.”

He added that he and his wife use their daughter’s love of riding as a way to encourage her to maintain good grades in school.

“If Kendall doesn’t do good in school, she doesn’t ride,” the father stressed.

With the limited number of events in 2020 now over, Kendall has ample opportunity to focus more on her schoolwork. But that doesn’t prevent her from dreaming of a bright future.

“I love competing. My dream is to one day qualify for the NFR [National Finals Rodeo held annually in Las Vegas],” she concluded.

Spoken just like a true champion….always striving to become the best of the best.