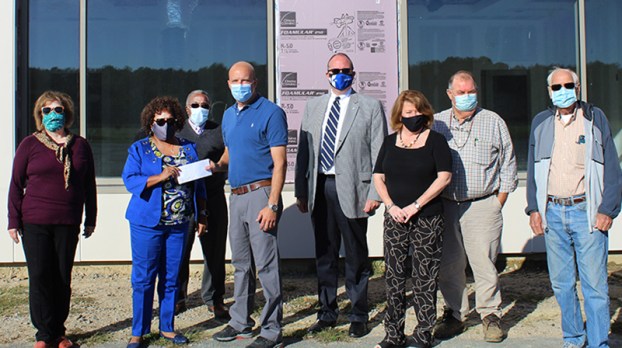 AULANDER – A recent donation from a local organization will help furnish the new terminal at the Tri-County Airport which is currently under construction.

Members of the Hertford County Committee of 100 met with officials from the Tri-County Airport Authority on Thursday, Oct. 15 for a check presentation. The $11,654 donation will be used to supply furniture and other necessities for the new building’s large conference room, including a conference table made by local Hertford County craftsmen.

“We hope the public will visit our new facility and be proud of the image we are projecting for our future as we enter a new era at the Tri-County Airport,” said Amy Braswell, who is both the Executive Vice President of the Ahoskie Chamber of Commerce and a member of the Committee of 100.

The local organization, which was incorporated in September 1984, was formed by citizens who wanted to grow the economy and prosperity and quality of life in Hertford County.

“The intent was to be a private sector partner aiding and supporting county officials in their efforts to attract new business and industry,” Braswell explained. “Still today, we strive to always put our best foot forward in efforts to create interest, package information, and sell Hertford County as a desirable new choice for new business.”

The airport’s previous terminal was almost as old as the airport itself, which was first commissioned more than 50 years ago in 1963. That old terminal was demolished to make way for the new facility and other site improvements, including new fuel service and a runway extension to accommodate larger jets.

“This beautiful facility, in today’s world, is the first impression prospective investors will have of the Roanoke-Chowan region, and it will be a strong, positive, and progressive one,” Braswell said.