MURFREESBORO – No injuries were reported after an early morning armed robbery today at the Speedway convenience store located at the corner of Main Street and Spring Avenue in Murfreesboro. 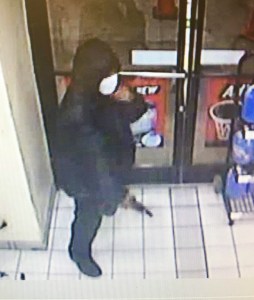 A still image from the store’s surveillance camera shows the armed suspect at the entrance of the Speedway convenience store, located at the intersection of Main Street and Spring Ave. in Murfreesboro. Contributed Photo

Murfreesboro Police Chief David Griffith reported the incident occurred at approximately 6:20 a.m. Wednesday, Oct. 21 and police responded to the scene within a minute or two of the call.

The suspect, an unidentified Black male who is reportedly between 5 foot and 5 foot 2 inches tall, brandished a pistol and took an undisclosed amount of money from the clerk. Only one clerk was working at the store at the time. The suspect then left on foot.

The Hertford County Sheriff’s Office is assisting the investigation.

Anyone with information can call the Murfreesboro Police Department at 252-398-4151 and can remain anonymous.