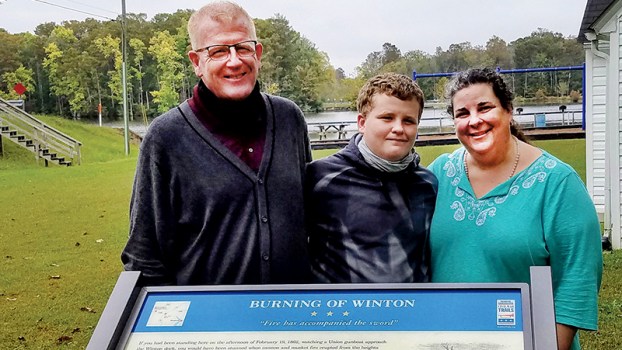 David Jordan’s parents, William and Kim, sponsored the update of the Civil War Trails marker in Winton. They donated the cost of the panel and relocation of the panel mount. Contributed Photo

Civil War Trails, Inc. has teamed up with the Town of Winton, the Winton Historical Association, and the Windsor/Bertie County Chamber of Commerce to develop two new signs in the two county seats. The two new signs tell a fuller story, bringing to light the African American experiences during the Civil War era.

Windsor and Winton are part of the Civil War Trails program which connects visitors to over 1,200 sites across six states. The program encourages visitors stand in the footsteps of soldiers, citizens, and those fighting for their freedom. Each Civil War Trails site is marketed internationally by state tourism offices, regional destination marketing organizations, and municipal partners. 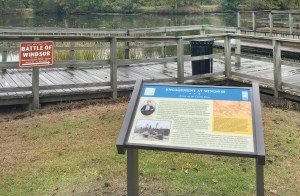 The sign in Windsor now explains not only the battle which raged in downtown but the enlistment of local Black men in Union regiments and the post-war experiences of those veterans who returned home. Contributed Photo

“We have been impressed by the number of visitors generated through the Trails Program, and the overall interest in checking out our Civil War Trails site,” Hoggard said.

In Winton, the Civil War Trails panel retells the story of the burning of the Hertford County town by Union forces in February 1862. To broaden the scope of Civil War history, the new marker also adds a sidebar about Martin Reynolds who served in the United States Colored Troops.

Working with the Winton Historical Association and the Town of Winton, Civil War Trails, Inc. moved the panel mount from along King Street to the Old Bridge Park on the Chowan River. This is the site of the ambush that led to Winton’s destruction.

As an ‘open air museum’, Civil War Trails is a popular way for travelers and families to explore in a safe and responsible way. Of course, as visitors drive the Civil War Trails they are gassing up, grabbing curbside service, and patronizing local businesses.

Andre’ Nabors, the Manager of Partnership Relations for Visit NC and the Economic Development Partnership of North Carolina said, “As the drive market becomes more of a focus for tourism in many areas, Civil War Trails are an essential attraction to guide visitors to historic sites and many other tourism venues in our regions.”

To compliment the work being done in this region, Visit NC and the Economic Development Partnership of North Carolina are working to reprint its popular Civil War Trails map-guide.

The updated content was made possible by the site sponsors including Hoggard’s Chamber and the Jordon family from Wilmington. The Winton Historical Association, Marvin Jones, a local historian, and Christopher Meekins from the North Carolina Office of Archives and History provided the information which helped to expand the narrative on both signs.

Grassroots by design, the Trails program seeks to lift up these often forgotten stories and to immerse the visitors in local history as told by locals.

“There are so many more stories to reveal about the men and women of color in our region who sacrificed to keep the country whole and expand freedoms for everyone,” said, Marvin Jones, historian from the Chowan Discovery Group.

WINTON – Hertford County has officially approved a measure that puts a temporary halt to the issuance of permits related... read more