JACKSON – In a year of uncertainty due to COVID-19, one thing remained constant…..Jessie Martin conquering the opposition on a tennis court.

Martin, a senior at Northeast Academy where she also excels in basketball and softball, capped off an undefeated tennis season by winning the #1 seed singles title during the Tarheel Independent Conference Tournament. That event was held earlier this week at the tennis courts located at the Northampton County Cultural & Wellness Center in Jackson. 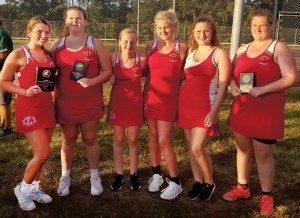 Members of the Northeast Academy tennis team for the 2020 season are, from left, Jessie Martin, Lizzie Smith, Harley Pierce, Kiersten Flythe, Natalie Luckadoo, and Emalee Jones. Martin was named as the Player of the Year in the Tarheel Independent Conference while Smith and Jones were each All-Conference selections. Contributed Photo

Martin also teamed with classmate Lizzie Smith in the #1 doubles final, an event they won 8-0 over the Ridgecroft duo of Turner and Claire Place. Martin and Smith were undefeated in doubles play this season.

During the post-tournament awards ceremony, Martin was fittingly named as the TIC’s Player of the Year.

Other results from the TIC Tennis Tournament are as follows:

Named to the All-Conference team were Emma Cobb, Trowell, Phelps and Clayton – all of Lawrence; Turner and Place of Ridgecroft; and Jones and Smith of Northeast.

Lee Hoffman of Lawrence Academy was named Coach of the Year.