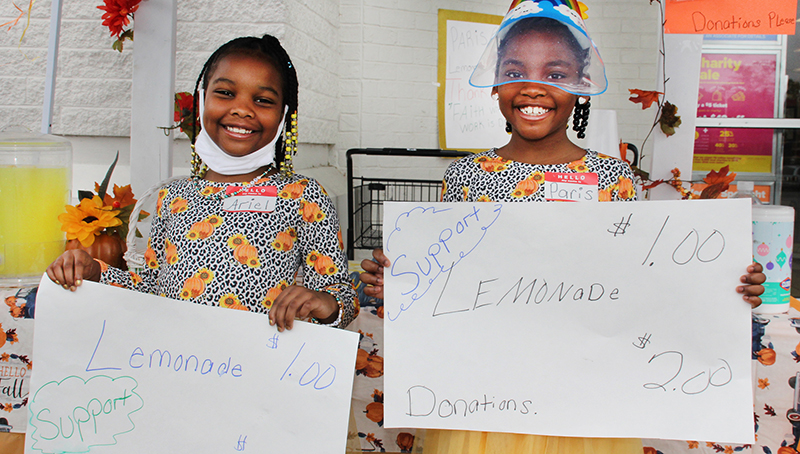 Ariel Cook (left) and Paris Carey use smiles and signs to entice prospective customers to stop at the lemonade stand on Saturday morning outside Belk of Ahoskie. Staff Photo by Cal Bryant

AHOSKIE – Reality begins with a vision. And if the vision of a local eight-year-old comes into full focus, Paris Carey has a bright future ahead.

This past Saturday, Paris and her mom, Shonda Epps, set up a lemonade stand outside the main entrance of Belk in the Ahoskie Commons Shopping Center. The purchase of that cold refreshing drink will help Paris further develop her line of beauty care items, to include lip gloss, a product she already offers.

The idea for a lemonade stand came about when Paris was younger.

“She started talking about that when she was about three-years-old,” Epps said. “That’s now transformed into a way for her to learn how to make money that can be used to purchase the items needed to make the lip gloss.”

Epps, who works part-time as a Customer Service Representative at Belk, spoke to her manager there and he supported the effort.

“He allowed us to set up our lemonade stand next the main entrance of the store,” Epps noted. “This was something small to help her get started.

“The outcome on Saturday was phenomenal; we thank everyone who stopped by and supported Paris. Her lip gloss and beauty care line will definitely succeed,” Epps added.

As most young children will so often do, they will change direction in what they like to do the best.

“Paris started out last year wanting to do something with Slime,” Epps said of the popular gooey substance made by mixing sodium Borate with water and then adding color. “Then she wanted to make dolls…..she’s very creative.”

That all changed when mother and daughter found themselves home together more often thanks to school classes canceled due to the COVID-19 pandemic.

“She wanted to make lip gloss; she enjoys putting on make-up and using beauty care products,” the mom said.

“I like lip gloss because my lips won’t get chapped,” chimed in Paris.

The mom and daughter started with a small homemade batch, which is made with olive oil, coconut oil, cocoa butter, beeswax, vitamin E oil, and mica, complimented by ordering the cosmetic tubes online. Paris then adds the coloring (dye).

“Right now she’s just giving away samples to her little cousins and her little friends,” Epps said. “The future goal is to sell them.”

And the mother-daughter duo has developed a product logo to incorporate into the lip gloss line.

“We’re in the process of having someone put that idea onto paper,” Epps said.

And that design may even be featured on t-shirts, another product that Paris wants to sell in the future.

Epps said Paris developed a creative flair at the age of 4.

“She is constantly using her hands to create things; I could see her mind at work,” Epps remarked.

Just recently, Paris approached her mom about a science project.

“Making ice crystals,” Paris explained as her mom showed off the creation.

“I put too much water in it; but the ice crystals experiment was her idea,” Epps admitted. “This wasn’t a school project; this was a science project on her own….that’s how her mind works.”

The bottom line for Epps is that she wants to offer encouragement to her daughter to reach out for what her heart desires.

“I don’t know right now what the future holds, but as long as she wants to dream, I’ll be there to support those dreams,” Epps said. “I’m encouraged by her creativity. Who knows what that will lead to down the road.”

For now, Paris will concentrate on her schoolwork as a third grader at Bearfield Primary School where she is a straight-A student.

She is also active in church where she sings in the children’s choir.

Paris also has a big heart. After the recent tornado in Bertie County that led to many residents there losing everything they had, Paris led an effort to collect several bags of clothing to help those in need.

With that it appears there’s a philanthropist already being developed within the young mind of a budding entrepreneur.